They say don’t judge a book by its cover but in the case of Transcendent Kingdom judge away because the story it contains is even more captivating than its Instagramable pink and green jacket.

Transcendent Kingdom is a deeply raw, compassionate and intimate novel about a Ghanaian family in Alabama, ravaged by addiction, depression and grief. Yeah, possibly steer clear if you’re PMSing or on a fragile hangover because the tears will be on tap.

For anyone familiar with Gyasi’s award-winning debut Homegoing, this novel is the opposite in both scope and feel. With a laser-like focus on its characters, the author dissects grief with a deft touch, peeling back the layers of human suffering with unsentimental precision.

The narrator, Gifty, is a 28-year-old Ghanaian-American neuroscientist studying reward-seeking behaviour in mice and the neural circuits of depression and addiction. If that went right over your head, fear not. This book belongs entirely to Gifty and her family story, as she looks to science for the answers she needs to make sense of the tragic loss of her brother Nana and her mother’s debilitating grief.

It is nothing short of a masterpiece and a work of whispered beauty and for that, Yaa Gyasi deserves to take the crown for the Women’s Prize for Fiction 2021. Best of luck!

But first… the blurb:

Find the team’s reviews in the gallery below > 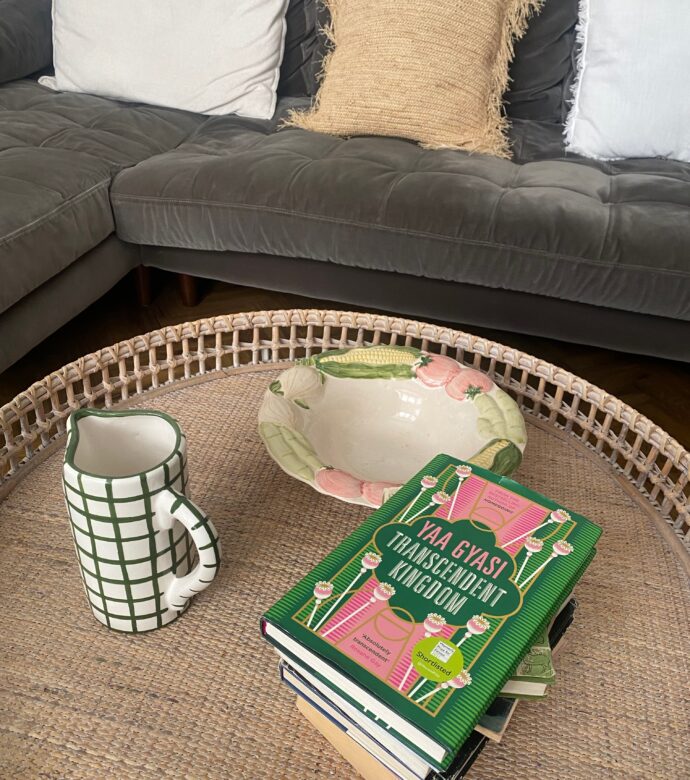 Well, that’s me off to read anything else by Yaa Gyasi! If it hadn’t of been for social plans getting in the way of my reading schedule (how dare my friends want to have fun without books), I would have finished this in one sitting. I don’t know what I was expecting from the blurb, but Gyasi definitely exceeded all my expectations. Transcendent Kingdom is told from Gifty’s perspective, a 28-year-old Neuroscientist who turns to science to try and understand why her brother died. From science, religion, trauma, grief, racism and the complex mother-daughter relationships, Gyasi tackles some hard-hitting themes but moves through the range of each emotion effortlessly. It’s a slow and quiet build that focuses entirely on familial suffering and the quest for meaning but I think that’s what makes it such a tender, intimate and ruminative read.

Rating out of 5: 4/5
Would you recommend? 100% especially if you love character-driven stories! 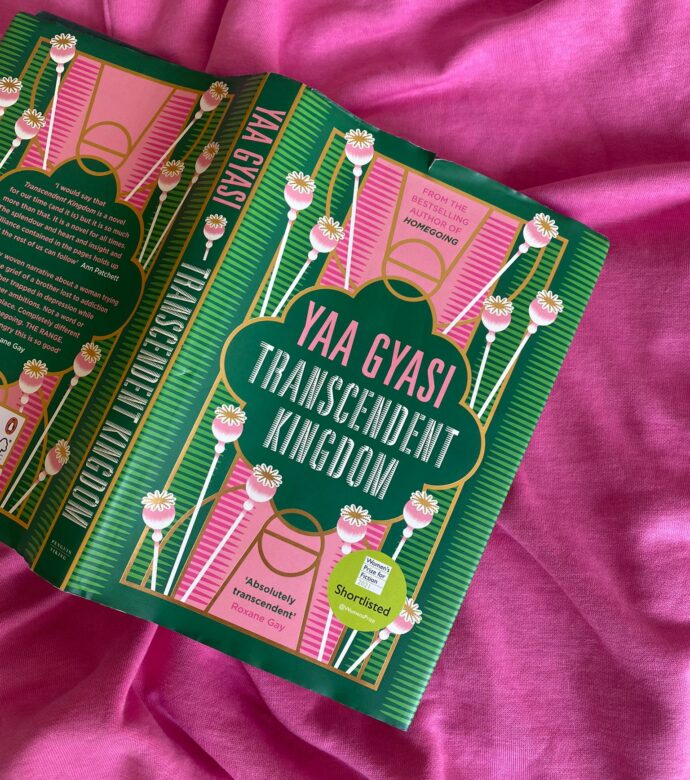 Written from the perspective of Gifty, a young black woman who works in clinical research, Transcendent Kingdom reads like a memoir and felt incredibly real and raw- at times not like a work of fiction at all! The subject matter and themes the book covers are heavy and complex (drugs, religion, faith) but the message of hope and persevere was something I felt added warmth and beautiful sentiment that left a lasting impact. The pace of the book felt perfect and was enough to keep me intrigued and interested whilst also not rushing through the, at times, delicate subject matter- I was v sad to reach the end of the book when it came. Transcendent Kingdom surpassed my expectations and had me hooked from the offset.

I haven’t read Gyasi’s previous novel- Homegoing- but after finishing TK I am itching to get down to Waterstones and pick it up because it’s clear the hype around her writing abilities, style and execution is certainly worth the hype. 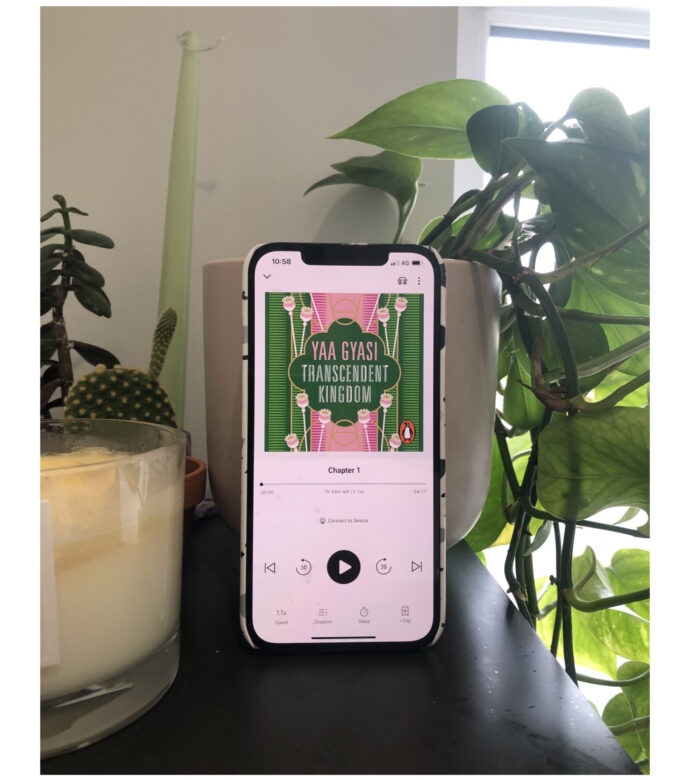 Transcendent Kingdom is just one of those books that is so beautifully written you start to look at life differently and feel it changing your outlook with every word. It’s been quite a while since I’ve sobbed reading a book but this TOOK me there, in the best way possible. Yaa Gyasi gorgeously weaves characters with narrative to create something truly transcendent (I know, I know, it’s just the perfect word). Having been born and raised in the UK, I’m privileged to have not had the negative effects that immigration can sometimes come with, people assume you move away and suddenly your life is supposed to be better but so much is left behind. The book touches on so many intense topics like faith, religion, mental health struggles, grief, and racism, each one opens your mind further and gives such an interesting perspective. If you’re looking for a read that will really change and stay with you then definitely pick up Transcendent Kingdom, and don’t let the ‘heaviness’ put you off!

Rating out of 5: 5/5
Would you recommend? Definitely, for a deep read 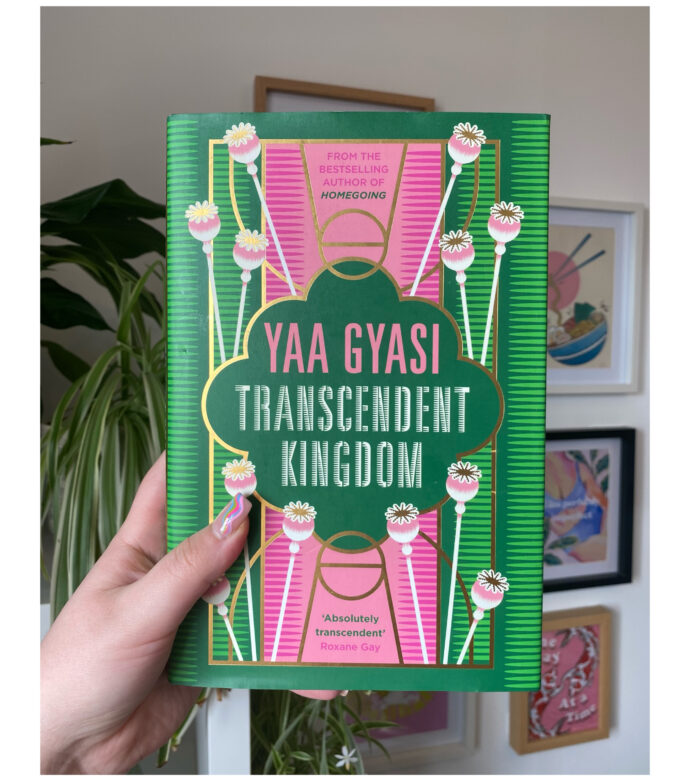 Transcendent Kingdom was a beautifully written book, it flowed effortlessly between the present and the past, which was done incredibly well as sometimes that can be hard to keep up with! Following Gifty who is studying for her PHD researching mice and drug addiction, you really become invested in her present and eager to know more about her past and what directed her on the path she’s on today. This book covers a lot of hard-hitting themes like addiction, depression, racism, faith and religion; I found myself learning from this book, feeling emotionally connected to Gifty and the issues she was facing too. This book almost doesn’t feel fictional at times, which is something I really enjoyed when reading.

I must admit I got a bit lost in the science aspect of it all at times, I’d say lack of understanding from my part (wasn’t my best subject at school lol), however the reasons she is doing this work is admirable to say the least and still very much an important part of the book. If you like a very character driven book, you will love this!

Purchase Transcendent Kingdom by Yaa Gyasi through the Bookshop.org here and enjoy 10% off your first order with the code ZOELLA10 at checkout, valid until September 30 2021. All sales support independent bookshops across the UK. Select a bookshop from the map before browsing so your chosen bookseller will receive the direct benefit of the sale. Thank you for supporting independent bookshops!

When Emira is apprehended at a supermarket for ‘kidnapping’ the white child she’s actually babysitting, it sets off an explosive chain of events. Her employer Alix, a feminist blogger with the best of intentions, resolves to make things right.

But Emira herself is aimless, broke and wary of Alix’s desire to help. When a surprising connection emerges between the two women, it sends them on a crash course that will upend everything they think they know – about themselves, each other, and the messy dynamics of privilege.

Will you be reading along with us this month? Don’t forget to tag us in your posts using the hashtag #ZoellaBookclub