One day you’ll reach the age when all you want to do of a weekend is nap or visit a National Trust property, and that time will creep up on you sooner than you think.

So, if you were too busy obsessing over the Bridgertons’ wisteria-clad mansion, Penelope’s bedroom and the pastel blue dining room of Regency dreams to even notice your strange new thing for spoons (IYKYK), consider this the real estate gossip rag you’d want through your letterbox.

From grand entrances to rolling parkland and princely dwellings where time really does stand still, these are the properties you need to visit as soon as your social calendar allows. *Manifests inheriting a sizeable family estate*

The house is a Victorian Italianate style mansion designed by Chevalier Casentini and completed in the 1860s. Throughout the home, everything remains just as it was, with family mementos and grand furniture left unchanged right down to the prized Goodwood cup which was won by the Thellussons’ family racehorse in 1835. 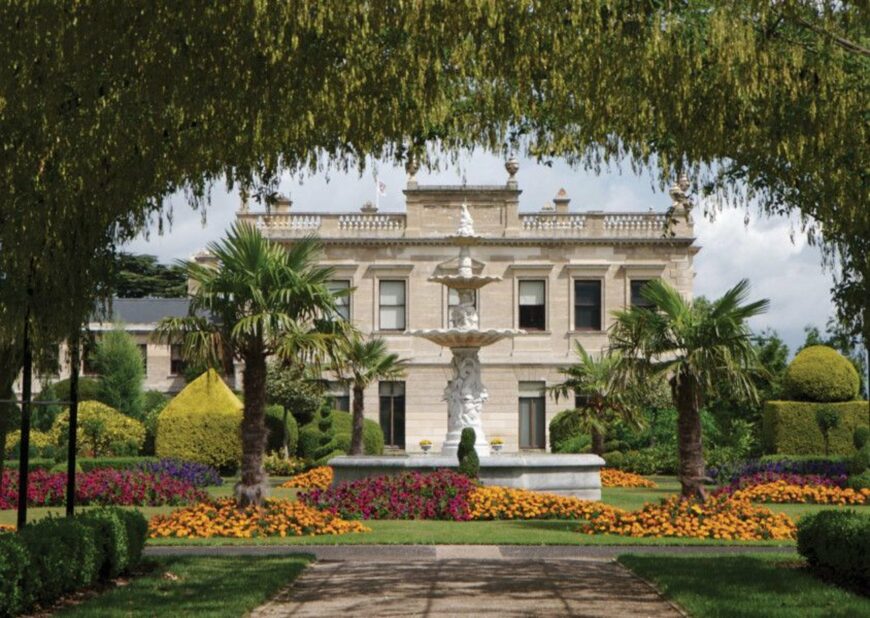 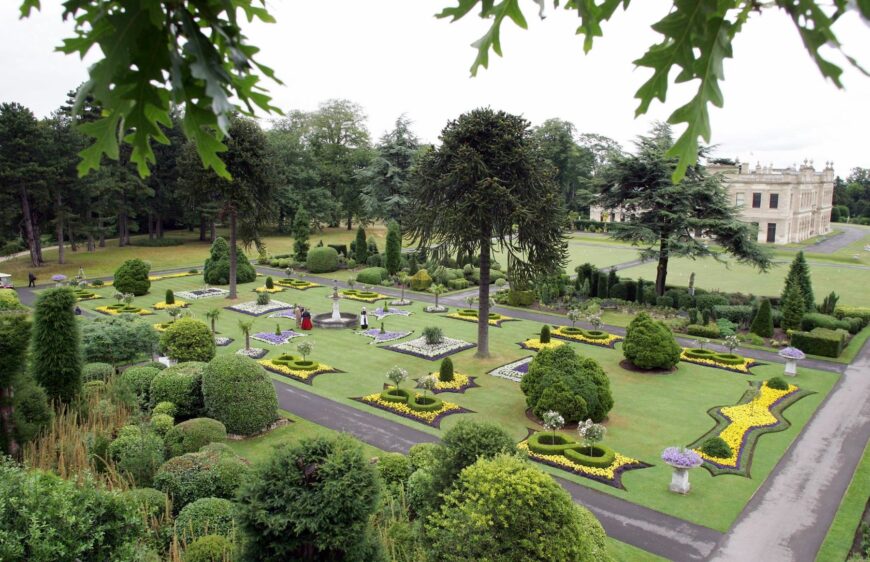 Nestled in the South Downs, this 17th-century mansion featured in the latest series of Bridgerton, where the North Gallery was used as a stand-in art gallery in episode seven. With one of the finest art collections in the care of the National Trust featuring works from the likes of Reynolds, Titans and van Dyck, there’s something to capture everyone’s imagination.

In addition to visiting the main house, you can also see the servant’s quarters and get an insight into the lives of the people who worked there. Once you’ve explored the house, you can promenade out in society around the 700 acre deer park. Game of Pall Mall anyone? 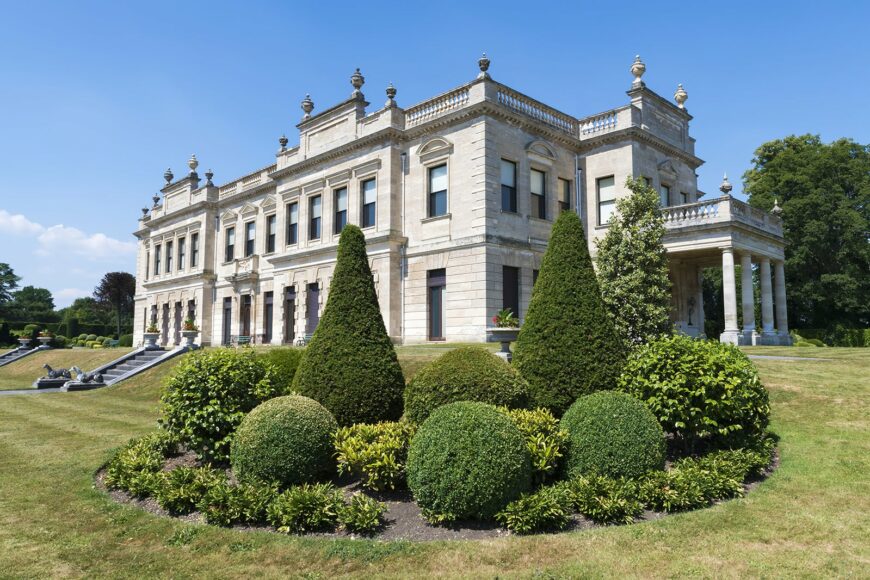 For fans of the OG period drama Downton Abbey, this humble Jacobethan manor house needs no introduction. Now world-famous thanks to its starring role in both the Downton films and the popular ITV series, Highclere Castle is one of England’s most visited destinations, and when it’s just as much a character as Mr Carson or Lady Mary herself, we can’t say we’re surprised. Set amidst 1000 acres of spectacular parkland just 70 miles outside of London, it’s a must-see for any Lord and Lady Grantham stans.

The opulent estate has a rich history as well as its contemporary cinematic claim to fame, with the first written records dating back to 749 AD when an Anglo-Saxon King granted the estate to the Bishops of Winchester. Bishop William of Wykeham built a beautiful medieval palace and gardens in the park. Later on, in 1679, the palace was rebuilt as Highclere Place House when it was purchased by Sir Robert Sawyer, the direct ancestor of the current Earl of Carnarvon. In 1842, Sir Charles Barry, who also designed the Houses of Parliament, transformed Highclere House into the present day Highclere Castle with its iconic exterior facade. Today, the castle is the home of the 8th Earl and Countess of Carnarvon, whose family have lived here since 1679. Public opening days run on set days and visitors can book onto self-guided tours as well as private and group tours of the castle. As you can imagine, the real-life Downton is in demand with opening days often selling out, so don’t sleep on tickets if you can get hold of them. Run, don’t walk.

One of Britain’s finest stately homes situated just outside York in the Howardian Hills, an Area of Outstanding Natural Beauty. The castle played a starring role in Bridgerton, doubling as the fictional Clyvedon aka homestead to the Duke and Duchess of Hastings.

The surrounding grounds are just as grand as the interior, with temples, lakes and plenty of woodland walks to discover. Bridgerton fans will remember The Temple of the Four Winds well from *that* scene between Daphne and Simon in the heavy downpour. Cue the string quartet and thunderous heart palpitations. Can we strictly call them *heart* palpitations if they’re in our pants? Who knows. 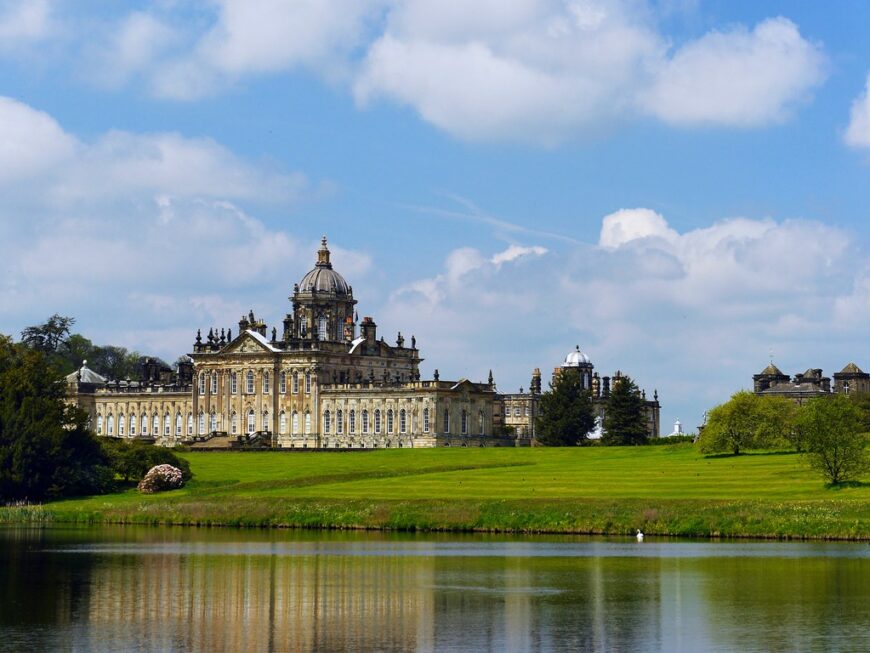 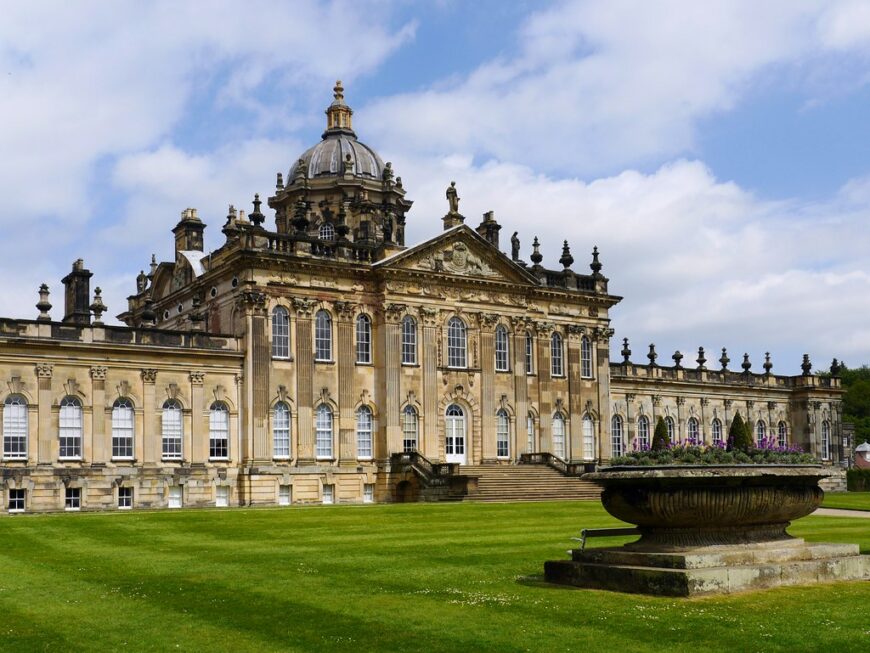 Best known for being the birthplace of former Prime Minister, Sir Winston Churchill, this sprawling Oxfordshire estate is a UNESCO World Heritage Site and one of the most exquisite works of 18th century landscape architect, Lancelot ‘Capability’ Brown. A masterpiece of Baroque architecture and landscaped parkland, and the only non-royal house in England to hold its palace title, Blenheim Palace provides an unforgettable day out for all the family.

Explore the gilded State Rooms with their priceless collections of portraits and tapestries, see Sir Winston Churchill’s former bedroom and get a glimpse into the lives of the palace staff over the centuries with the ‘Downstairs’ tour whilst learning about the 300-year history of this National Treasure. With the Marlborough Maze, Butterfly House, Walled Garden and Formal Garden, the grounds have just as much to offer as the palace, so why not make a day of it? 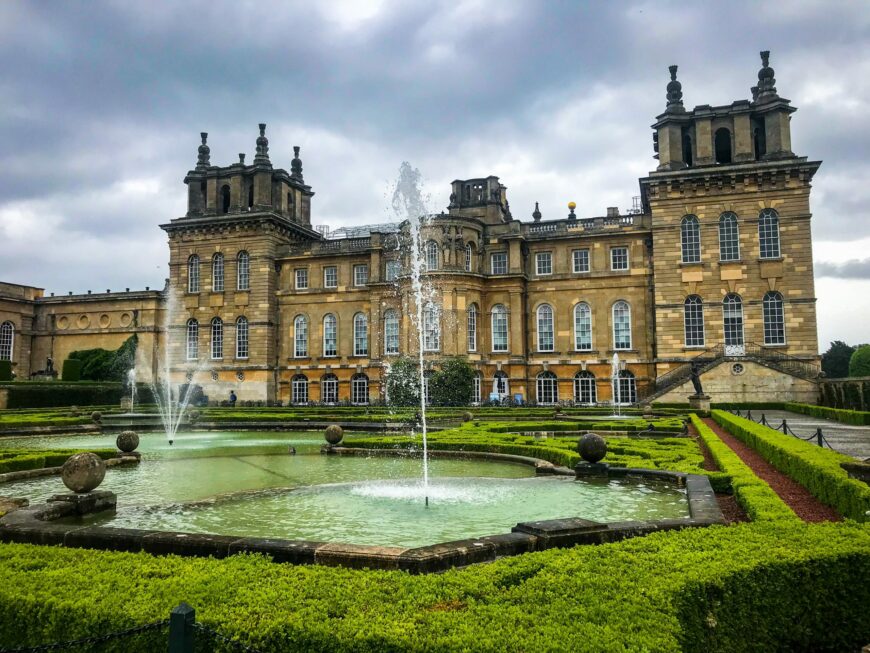 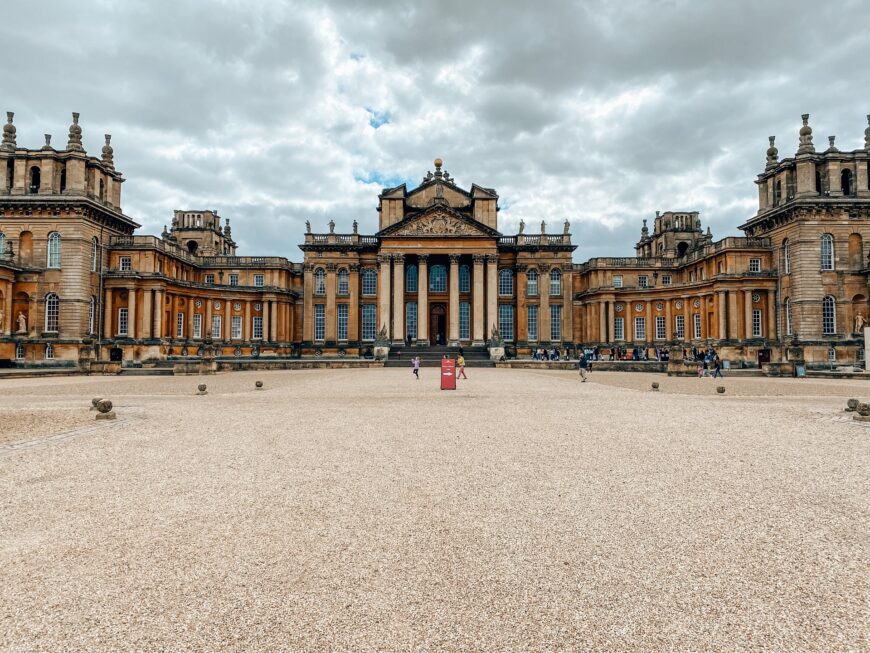 Famously known as ‘Number One, London’ this grand neoclassical mansion was once the first building to appear when entering the city from the west. Rumour has it if you were to send a letter to Number One London, it would still make it to this address but we’ve yet to test this salacious gossip…

Still one of London’s finest buildings, Apsley House was designed by Robert Adam for Baron Apsley in the late 18th century, but later sold to the first Duke of Wellington aka ‘The Iron Duke’ in honour of his triumph over Napoleon at Waterloo.

Following some modernisation, Apsley House opened to the public in 1952 when it became a museum. By 1982, the interior of Apsley House had been renovated under the guidance of the V&A Museum to reflect it as it first appeared when the Duke of Wellington resided there centuries earlier. Today, it stands in splendid isolation next to the formal entrance of Hyde Park looking proud and palatial as ever. If you’ve got a weakness for stairwells and colossal nude statues… you’re guaranteed a glorious day.

A vision of pastel pink and Bridgerton blue, Kenwood House is one of London’s hidden gems. Located on the edge of Hampstead Heath, it boasts splendid manicured grounds, breathtaking interiors and a stunning world-class collection of artworks by Gainsborough, Romney, Zucchi, Rembrandt, Vermeer, Turner, Reynolds and more.

Roam the ancient woodland surrounding the house and marvel at the neoclassical architecture including the pièce de résistance: The Great Library designed by Robert Adam – restored to its original 18th century splendour and original colour scheme in 2013. Psss the real highlight of Kenwood? It’s free. Flawless, my dear! 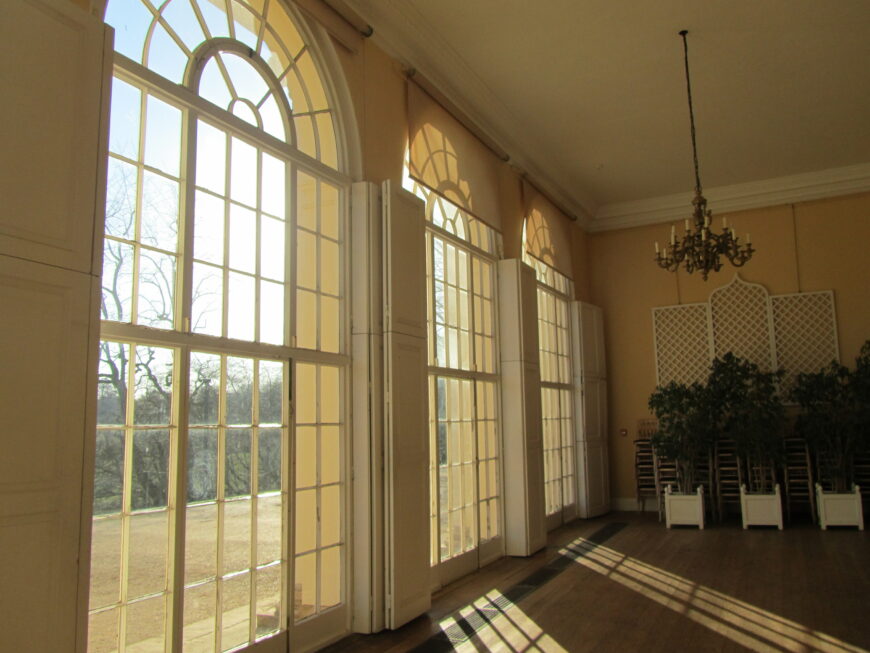 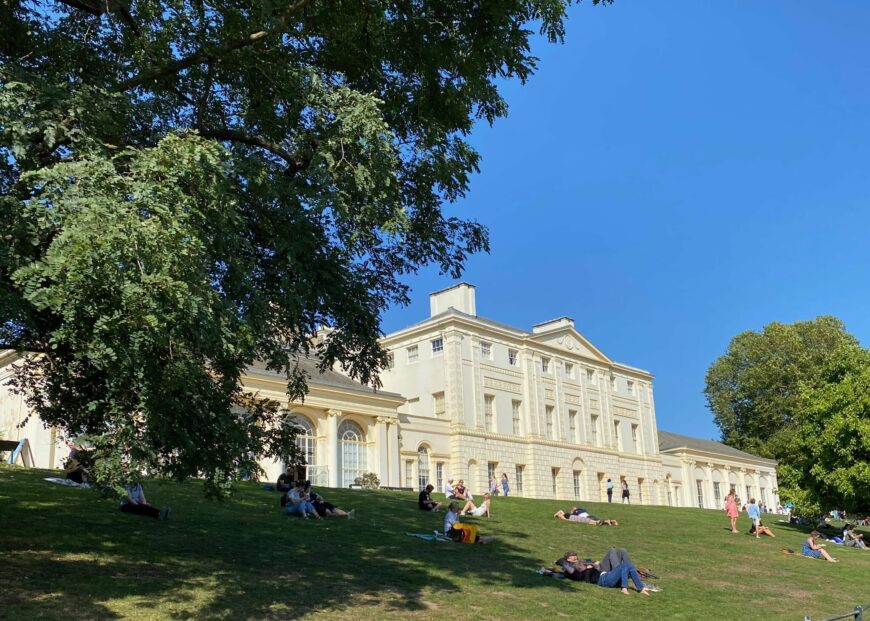 You may recognise this incredible country house from the screen adaptation of Jane Austen’s Emma starring Anya Taylor-Joy. With its mint green drawing room and Wedgwood pottery blue hallway – redecorated for the movie – the West Sussex estate served as the perfect backdrop for Emma’s Hartfield home.

First built in the 15th century by Sir John Gage and remodelled in the 18th century, Firle Place is an interesting mix of Tudor and elegant Georgian architectural styles. It has been the home of the Gage family for over 500 years, and is currently lived in by Henry Nicholas, 8th Viscount, and his family. 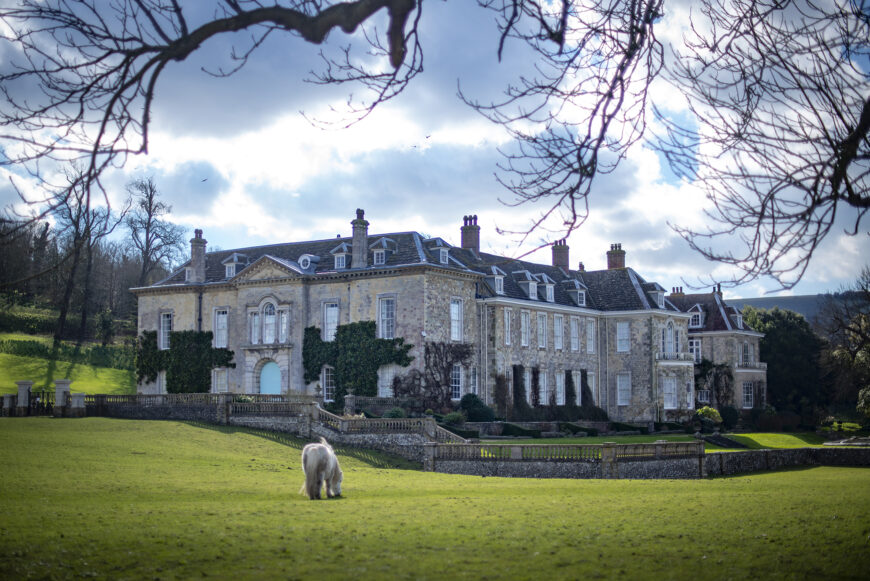 Surrounded by its extensive park (the sheep will escort you to the house, don’t you worry), it’s a quiet, picturesque spot perfect for city dwellers looking to escape the hustle and bustle for a few hours. Tuck into afternoon tea on the terrace, visit the charming 13th century village church and admire the sweet chocolate box houses lining the streets of the surrounding Firle estate.

Open to the public from 22nd May.

Hatfield House was built in 1611 by Robert Cecil, First Earl of Salisbury and Chief Minister to King James I, and has been the home of the Cecil family ever since.

The Jacobean house and garden, currently the home of Robert Gascoyne-Cecil, 7th Marquess of Salisbury, is steeped in Elizabethan and Victorian history and is frequently used as a shoot location for period pieces from The Favourite, The Crown, Rebecca, Enola Holmes and of course, Bridgerton.

IMO, no visit to Hatfield House is complete without seeing The Marble Hall, which takes its name from the striking black and white chequered marble floor. Lovingly preserved with its wonderfully extravagant oak carving, The Marble Hall remains the same today as it was all those centuries before. You can find the iconic Rainbow Portrait of Queen Elizabeth I (and most colourful Tudor portrait) overlooking the hall, with the inscription “non sine sole iris”, meaning “no rainbow without the sun” referring to Queen Elizabeth as a bringer of peace after a period of storm. This room provided the backdrop for Lady Trowbridge’s party in Bridgerton season one, when Daphne and Prince Friedrich of Prussia briefly danced together. Interior scenes for the Gentleman’s Club and the Featherington family home were also shot here, so be sure to dig out your ‘something yellow’ for the occasion in ode to ya main girl, Pen.

Take a trip to the famous grade-I listed home and favourite royal residence of Henry VIII, his wives and children (and more recently, the fictional residence of Bridgerton royalty, Queen Charlotte).

Discover the magnificent Great Hall where Henry laid on his famous banquets, lined with some of the most valuable tapestries in the world and boasting a stunning hammerbeam roof.

Transport yourself back to the heyday of Tudor feasting and entertainment in Henry VIII’s Kitchens and walk the infamous Haunted Gallery in the State Apartments at Hampton Court Palace – apparently, Henry VIII’s fifth wife Catherine Howard, who was beheaded for adultery, roams the corridor (hence the creepy name). 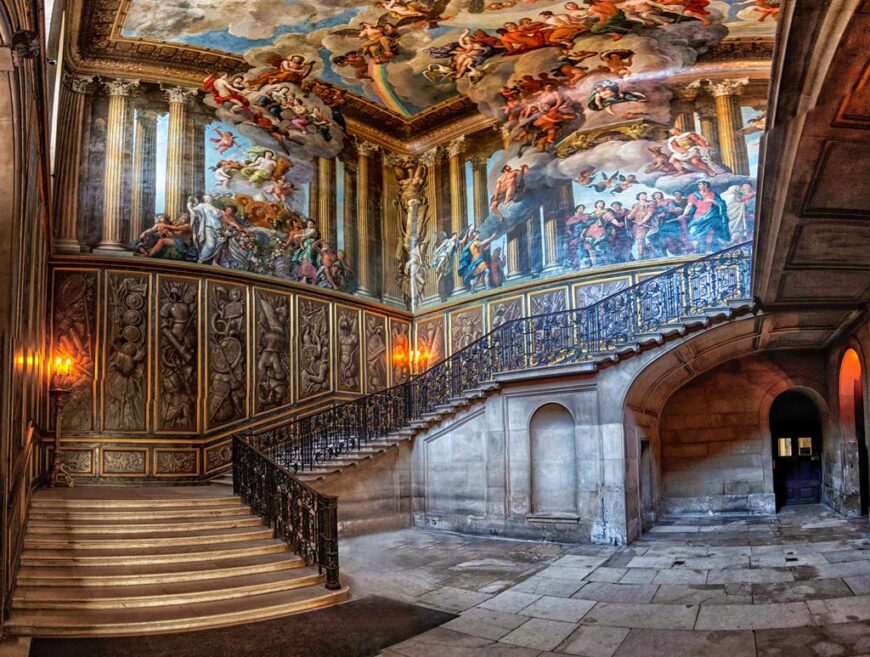 Have a go at the oldest surviving hedge maze before relaxing in over 60 acres of the beautiful Palace gardens that run down to the River Thames, featuring sparkling fountains, glorious displays of over 200,000 flowering bulbs and 750 acres of peaceful royal parkland.