If picturing a library conjures up an image of a damp and dusty extension of your former primary school, be prepared to have your mind changed for good after scrolling through these impressive, striking and downright beautiful spaces, so good you might want to consider travelling to all 8…

From Switzerland to Prague, New York to Madrid, there’s certainly no shortage of impressive booky buildings dating back further than is oftentimes comprehensible. Housing both original and modern works, these libraries are not only architecturally impressive, but are also no doubt inspiring a new generation of art, history and culture fanatics to fall in love both with their stunning interiors and act as a reminder of the universal, centuries-spanning joy that comes from seeing a collection of books together. Whether it be works of history, religion, art or pure fiction, keep scrolling to see 8 of the most impressive libraries in the world:

Forget the seven wonders of the world, say hello instead to the Abbey Library of Saint Gall in Switzerland.  Be prepared to be swept off your feet by one of Europe’s oldest libraries (the earliest evidence of a library collection on the site dates back to around 820 CE!) , and a ceiling so dreamy you’d be forgiven (perhaps not by library security) for lying down to admire it. Even from early on in the Abbey and adjoining library’s history the site was known for its collection of illuminated manuscripts and writings, and became a leading centre for science and Western culture around the 10th century.

In the mid-18th century the world-renowned collection was moved to a new library space and decorated in a Baroque rococo style that can still be admired to this day, and its elaborate ceiling artworks give the space an ethereal and magical energy making it a must visit for history, book and art lovers alike. Above the entrance to the library you’ll find a Greek inscription which translates as “pharmacy of the soul”- the monks who founded the library considered books as medicine for the spirit, and that we won’t certainly disagree with that! 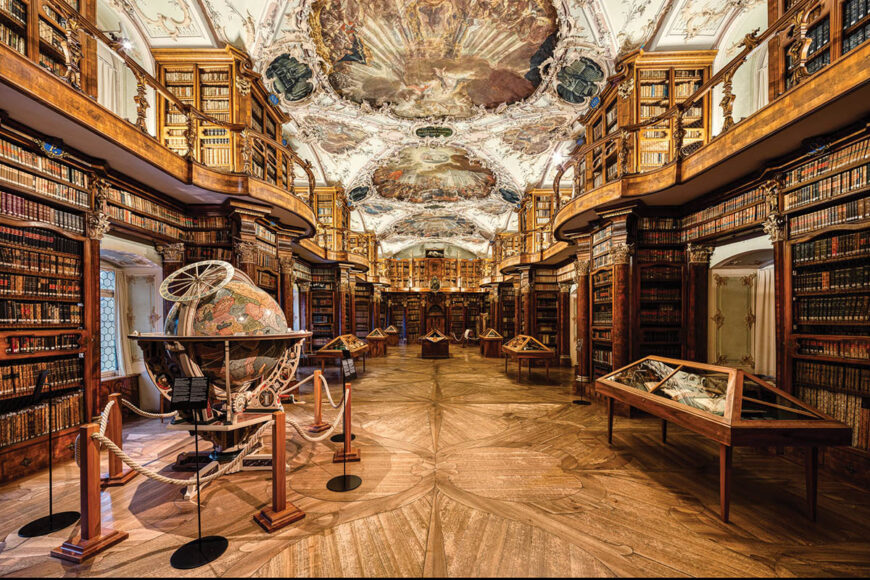 FYI: Sadly photography isn’t permitted inside the library, but you can visit on guided tours and use this digital detox as an opportunity to step back in time and lap up its two floors of majestic beauty.

Accidentally Wes Anderson in library form, the George Peabody Library is a feast for the eyes, with its beautifully pleasing symmetry, five stories of cast iron balconies housing its book collection, and 61-foot-high atrium flooding the space with natural light. The library contains 300,000 books in total, mainly from the 19th century and focusing on religion, architecture, topography, American history, and literature, exploration, and travel.

The Library was first established in 1857 when successful Baltimore merchant George Peabody pledged $300,000 as an investment for a cultural centre to be named the Peabody Institute. The Institute was set to open in 1860, but the onset of the American Civil War pushed construction back six years- and boy was it worth the wait. Designed by architect Edmund G. Lind, the library is renowned for its striking interior and takes inspiration from Roman and Greek architecture- a style known as Neoclassicism. 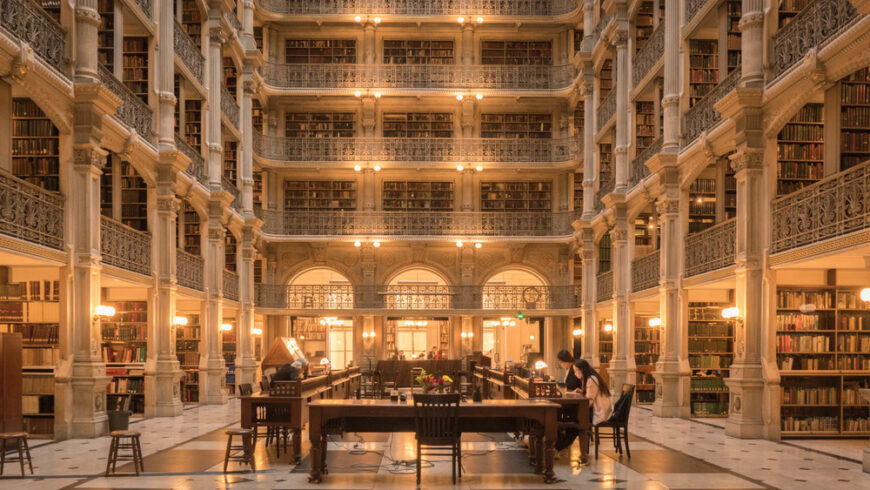 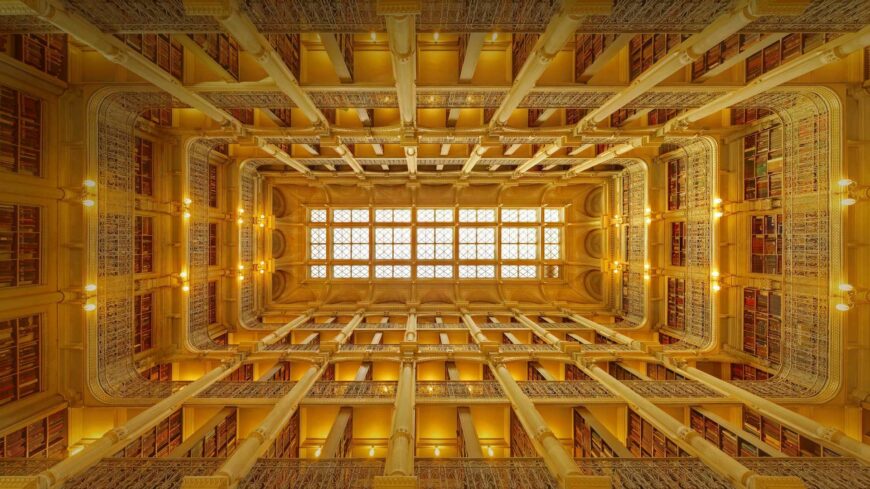 The details of the library’s design really set it apart as a work of art, with Lind incorporating flowerlike embellishments into the railings and painting them grey to replicate stone as means of safely creating a structure that could house 300,000 flammable objects lit by gas lamps. Take a 360° tour of the library here and imagine walking its vast shelves in search of a magical work of fiction.

The idea of creating the library came from a group of 43 Portuguese immigrants who wanted to spread culture and literature among the Portuguese communities living in Brazil and to this day remains of immense cultural value to the Portuguese colony. Built in neo-manueline style (considered by some as Portuguese architecture in its purest and most unique form), its limestone exterior- constructed of Lisbon stone brought by ship from Portugal to Rio- displays statues of past Portuguese explorers including Pedro Álvares Cabral, Infante D. Henrique, Vasco da Gama, and Luís de Camões. 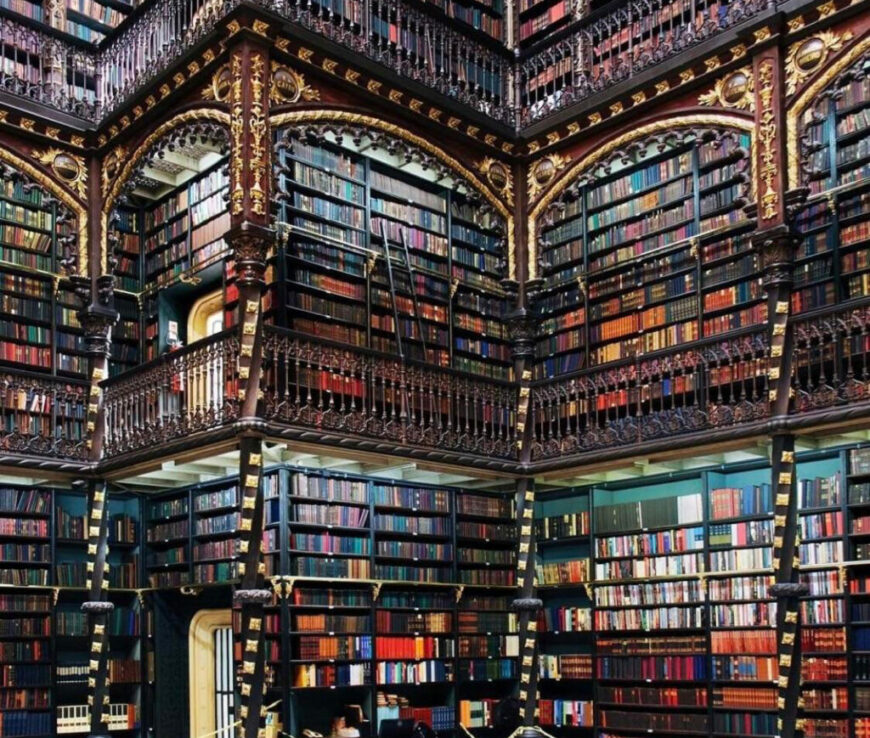 Inside, it strikes the perfect balance of moody and inviting thanks to the dark stained wood and jewel toned-books on its shelves, contrasting its light and bright feel thanks to the natural light that pours through its stained-glass dome. Designed by architect Rafael da Silva e Castro, the building was voted the 4th most beautiful library in the world by Time Magazine!

Said to have inspired the design and decoration of the Vatican library in Rome, there’s surely no better accolade when it comes to architectural magic than this. Erected in the 16th century by Phillip II of Spain, his aim was to build a library that would hold not only books and manuscripts but also instruments of scientific learning such as ornate globes and maps of the known world. This emphasis on unifying the humanities and sciences was a new and exciting idea in the Renaissance period, and so the Royal Library of San Lorenzo de El Escorial was born. It was the first library to display its books and manuscripts in shelving cases along the walls rather than in bays so that the titles would be visible to visitors and avoid the damage caused to the books when they were continually taken out to view. Ingenius for its time!

The library consists of several rooms (most of them no longer used), however, only the Main Hall is open to the public. Measuring 177 feet long, 30 feet wide and 33 feet high, the vast room’s ceiling is curved in vaults and painted with frescos- a mural painting technique that involves painting with water-based paint directly onto wet plaster so that the paint becomes an integral part of the plaster. The iconic painting is divided into seven parts and in each section one of the seven arts is represented: Grammar, Rhetoric, Dialectics, Arithmetic, Music, Geometry and Astronomy. 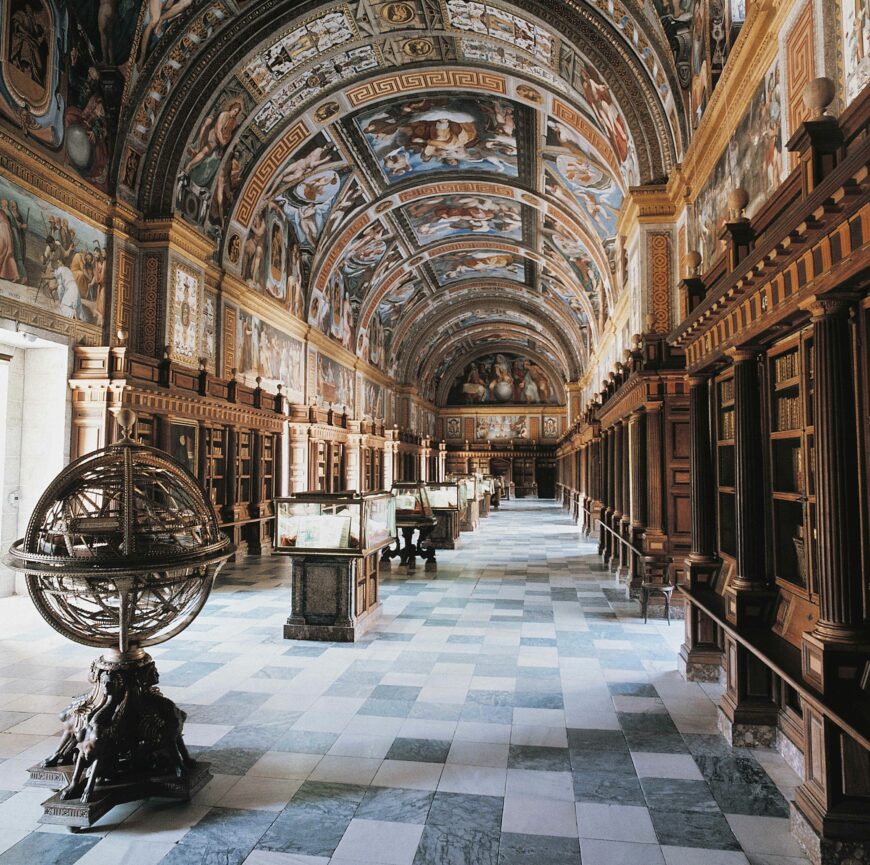 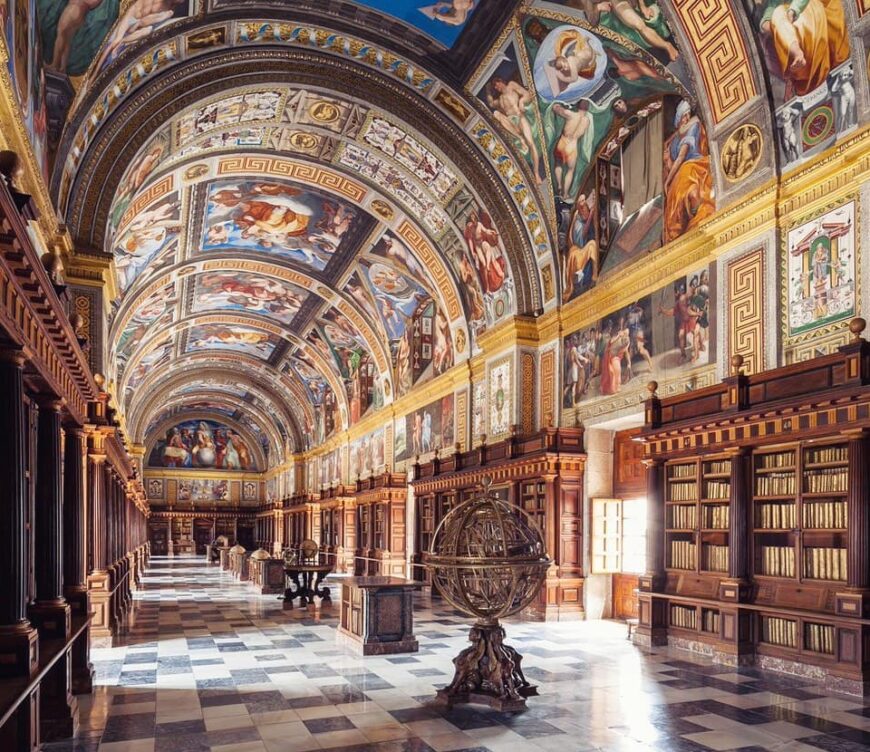 Majestic, magical and rich in history, the library was, and remains to be,  a Renaissance statement of power, majesty and prowess.

Framed by a magical mountainous scene- the Gesäuse National Park- the Admont Abbey receives around 80,000 visitors every year who travel to see its unique 70 metre long library and museums. Originally designed in 1764, it was constructed in the following years by Austrian master builder Josef Hueber, a firm believer in the ideals of the Enlightenment: “Like our understanding, spaces too should be filled with light.”

The Abbey’s sculptor Josef Stammel created the numerous, elaborate limewood carvings in this magnificent space, most famous are the ‘Four Last Things‘; oversized figures of Death, Judgement, Heaven and Hell. These were actually carved before the library was built and only subsequently incorporated, hence the stark contrast with the Enlightenment concept that fills the rest of the space.

Bookworms unite- the library holds some 70,000 volumes while the Abbey in total owns an impressive nearly 200,000 books. This Baroque-Gothic masterpiece wins the heart of all those who pass its doors.

Formerly the headquarters of the Public Record Office, the Maughan Library was acquired by King’s College University in 2001 and has been an iconic study location for its students ever since. Following a £35m renovation designed by Gaunt Francis Architects, the Maughan is the largest new university library in the United Kingdom since World War II.

The library is periodically open for public visitation, however it is currently only accessible for students of the university during peak exam period. The Grade II listed, neo-Gothic building is located in Chancery Lane, and inside you’ll find a dodecagonal reading room (inspired by the British Museum), and a former medieval chapel which is now an exhibition space showcasing the special collections of the library. 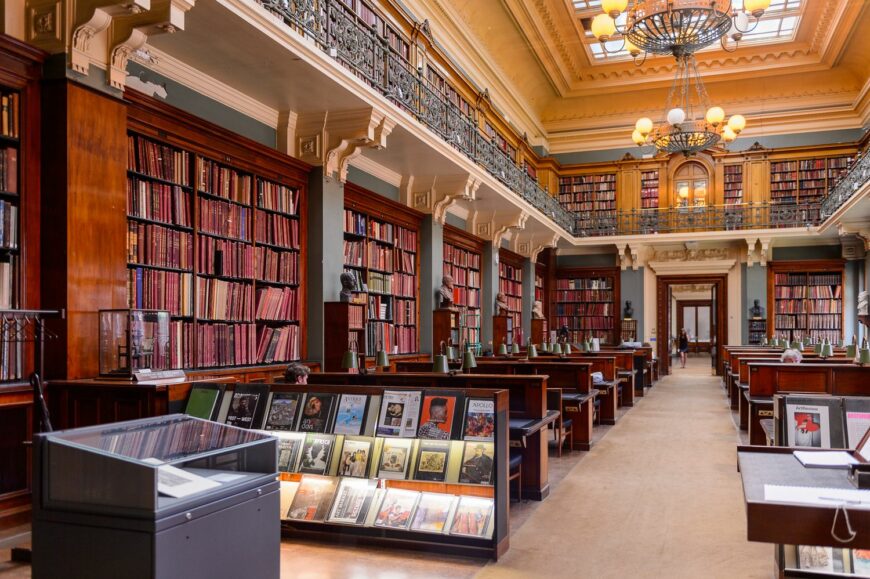 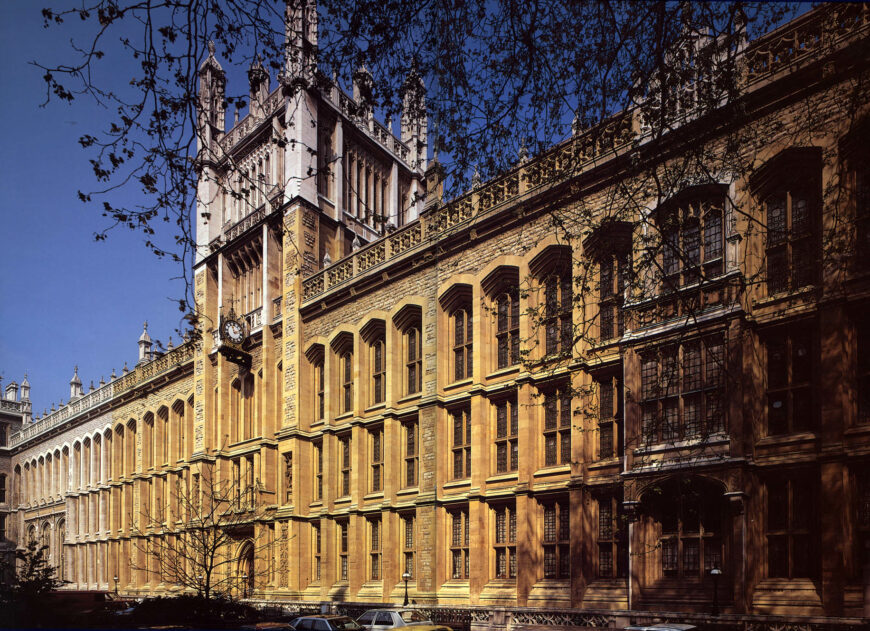 The round reading room is one of its most impressive spaces, so much so that it made an appearance in the 2006 mystery film, The Da Vinci Code. Take a visit and lap up the old and new charms that this central London gem has to offer,  even from the outside.

Whimsical: say hello to your dictionary definition. Wiblingen Monastery Library’s colour palette consists of rich golds, pinks and blues, with a new intricacy and detail catching your eye at every turn.

Built in the style typical of late-Baroque architecture, the colourful ceiling frescoes (the technique of mural painting on freshly laid (“wet”) plaster, remember) are considered some of the most important representations of this art form in the Württemberg region. The columns and statues are made out of wood, but they are cleverly painted to look like marble, with the library holding a total of over 15,000 books. 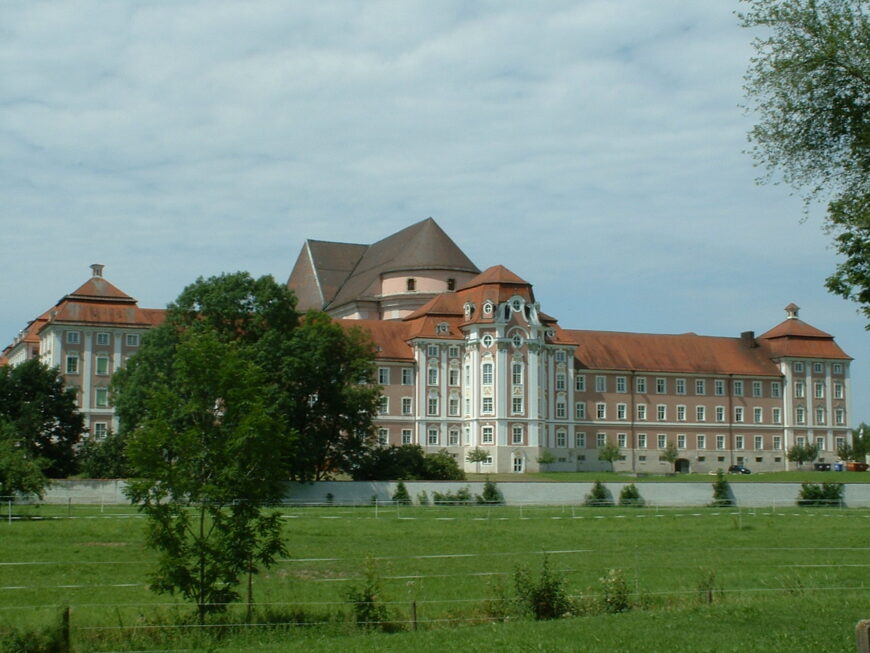 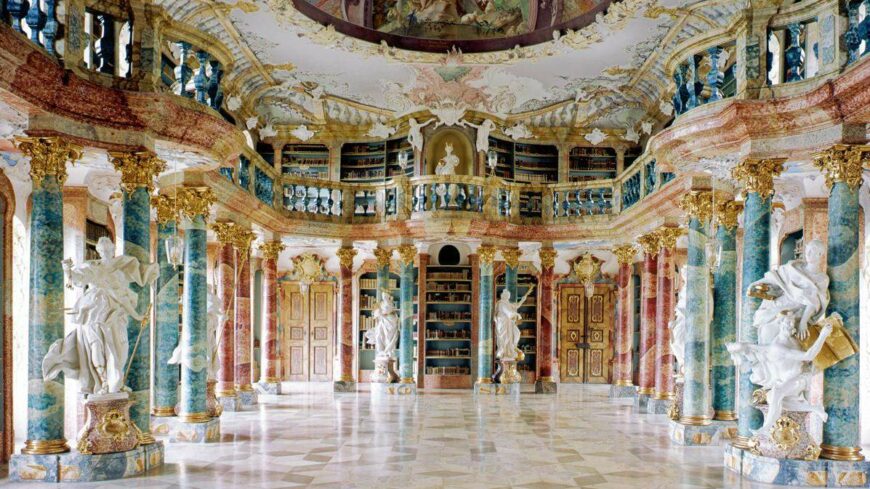 The numerous statues and sweeping ceiling design represent the architect’s vision that the library be a place for preserving “treasures of wisdom and science”. Visit for yourself to experience the truly impressive 72 metres long by 27 metres wide space, as well as the adjoining monastery museum for the full historic lowdown.

If you had a few spare million sitting in the bank, would an impressive personal library next door to your home be on your list of ways to spend it? That was the case for financier J. Pierpont Morgan, who chose architect Charles Follen McKim to design a library to house his growing collection of rare books and manuscripts, and what a building he ended up with as  a result! Constructed of Tennessee pink marble, the exterior of the library is almost as impressive as the interior which features 20 different spaces, including galleries, the iconic library, a performance hall, and more. Majestic, striking and impressive in every way, the library is as much a work of art as the books and collectables it houses.

In 2010 the interior of the library was restored to its original grandeur, including a new lighting system to illuminate the beautiful murals and decor of the four historic rooms. Period furniture was reupholstered, and original fixtures—including three chandeliers removed decades ago—were restored and reinstalled. The museum and library also hosts temporary and seasonal exhibitions including works from different artists and authors (Charles Dickens and Emily Dickinson have been covered in the past), meaning adding a visit to your New York itinerary is one you won’t regret, even if for the gift shop and cafe. 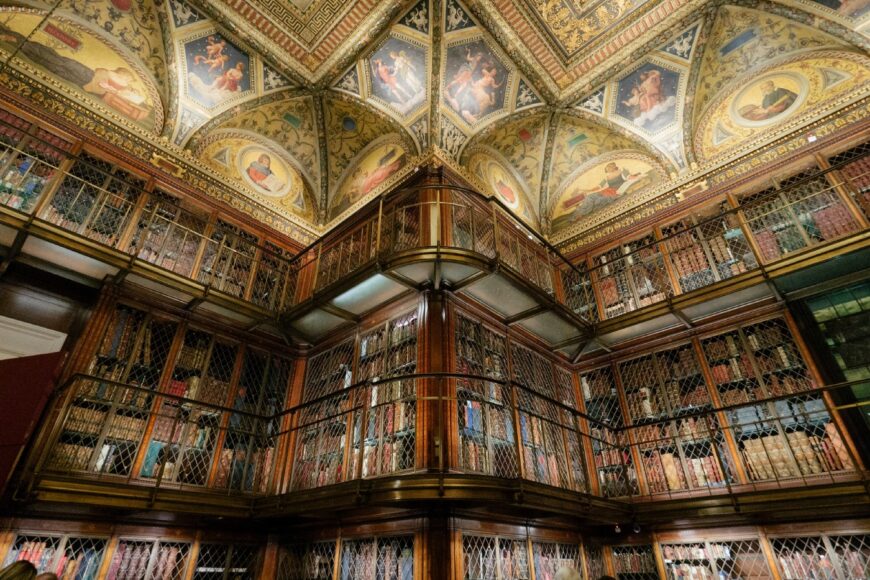