There’s only one way to avoid that post-turkey lull and that’s with forced family participation. If you’ve got the family over this Christmas and you don’t want to settle on another game of charades, these are the pen and paper parlour games to keep you entertained well past the Queen’s speech.

Talking of the Queen, you may have seen this raucous drinking game on season 4 of The Crown in that excruciating scene when the Iron Lady, played by the wickedly talented Gillian Anderson, is called to ibble-dibble with the royals. Spoiler alert: she doesn’t do party games.

The premise of the drinking game is to say the tongue-twister without fluffing it up. If you hesitate or trip over your words, you drink. An ibble-dibble is a player and a dibble-ibble is the name of a mark you stamp on your face with a blackened cork when you get the gibberish saying wrong.

All participating ibble-dibbles (that’s players, remember) must grab their tipple of choice and gather in a circle. One player assigns a number to each person. If you get number 7, you’ll henceforth be known as number 7 ibble dibble. Once everyone has a number, someone will need to light the end of the cork to blacken it and blow it out. Then the nonsensical game can begin!

As the game progresses, you’ll not only have to remember the who’s who of ibble-dibbles but you’ll have to keep an eye on their dibble-ibbles, too. If a player fluffs up their words or hesitates, they receive a dibble-ibble on their face. They must then take a sip of their drink and try again.

When do you call it a night and just drink in a circle instead? Once everyone’s had enough and grandpa ibble dibble’s catching Zs in the chair.

Each person needs to think of a celebrity or character. For each game, you’ll need a leader, this person will leave the room and everyone else will take it in turns to go and secretly tell the game leader who they are. The game leader will then write all the names down and throw in three wildcards. They then return to the room and read out the list three times, including the wildcards. The person to the left of the leader then kicks off the game by picking any person (not the game leader) and matching them with a celebrity / character. For example, “Dad, are you Boris Johnson?”. If you’re right, you join up with that person, secretly share your name with them and form a little team. The next turn belongs to the person who was asked, whether the guess was right or wrong. You keep going until the teams get bigger and eventually, there’s one player left. They win the game.

Everyone is trying to kill another person, so trust no-one. Each player writes their name on a piece of paper plus one festive object in the house on another piece of paper. Make sure it’s an object you can actually pick up, no dogs dressed as reindeer or Christmas trees. You have been warned.

They then give their person and object to their killer so they can continue sleighing the Christmas Day proceedings.

Each person takes a name out of a bag and an object (if you pick yourself or another name instead of an object, keep going). You need to pass the person you draw the Christmas object you draw and if they take it without realising, they die. They then give their person and object to their killer so they can continue sleighing the Christmas Day proceedings.

Is it even Christmas Day if you’re not trying to attach a Post-it note to your impossibly clammy forehead? The Christmas jumper and turkey sweats always make you come unstuck, eh.

This game is super simple – every player writes the name of a famous person onto a sticky note and puts it on another player’s head. Keep going round until everyone has a name. You all take it in turns to guess who you are by asking the other players yes / no questions about who you are. If you get a ‘yes’ you keep on asking questions, if you get a ‘no’, the next player takes their turn. Keep going until everyone has guessed who they are – and take particular delight in the person who ended up with Olaf.

Heads Up is a charades style app, displaying words that your audience have to explain or act out to you. Simply hold your device with your screen facing your audience, start the timer and off you GO. When you get an answer right, simply tilt your head down to move onto the next round, to pass tilt your head up. The more inebriated you are, the funnier it gets.

Separate into teams with one person in each group playing the human Christmas tree. Each team then has just one minute to transform their human into a winning Christmas tree using wrapping paper, tape, decorations and whatever else they can find tbh. May the best human spruce win.

Message Under A Plate

Before your guests sit down for dinner, prepare slips of paper with weird or wildly inappropriate dinner table phrases under each plate. The objective? To casually slip your random sentence into conversation over dinner without getting caught out. If a player guesses wrong, they’re out. Whoever drops their message under a plate without getting caught will be the winner/s. 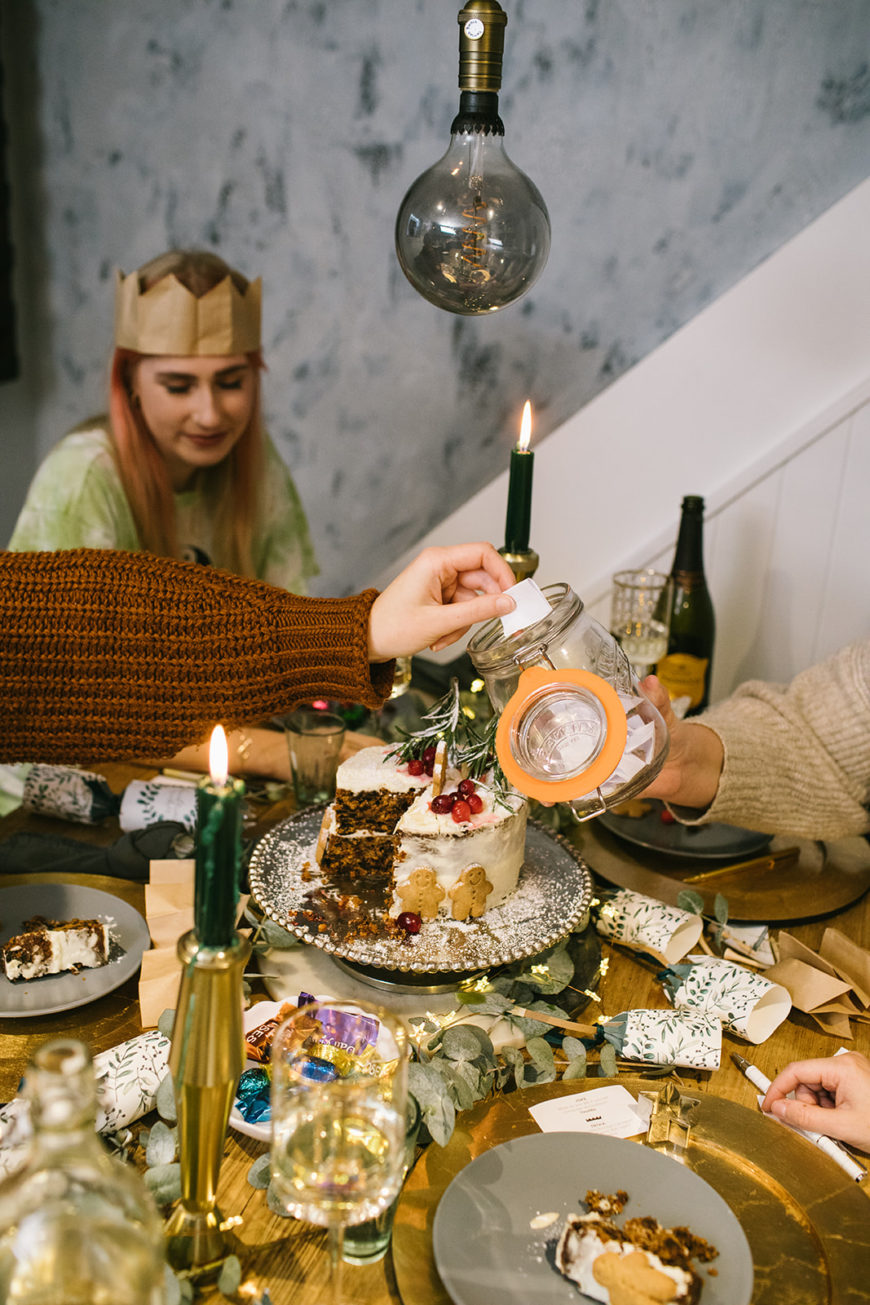 The first person from team one chooses a piece of paper from the bowl and has one minute to describe as many people to the rest of the team without using their name. When the team call out the correct name, the person puts that piece of paper to the side and takes another piece of paper out the bowl. At the end of the minute, they count up how many names they got right, and the next team go.

You can also add on a 4th round like Zoe and act out the people under a blanket!

The second round is to describe the people on the paper using just one word, then the final round is to act it out using charades. A different person from each team should take the lead on each round. Whichever team has the most amount of points after the three rounds wins. You can also add on a 4th round like Zoe and act out the people under a blanket! As the rounds go on people tend to remember everyone in the bowl so it’s not as hard as it might seem.

Just like the name game, only this time you draw what you see. Split into two teams again and designate a team artist each, this person is responsible for drawing the word on a big piece of paper for the rest of their team mates to guess. When the team get it right, the person drawing takes another piece of paper from the bowl and draws the next object. When one minute it up, they count how many words they got right and the next team have their go. The team who draw the most correct words within the time limit wins.

Write down a series of words or phrases on slips of paper, fold them up and mix them in a hat or bowl. You can split up into two teams to compete or play as a single group. One person from each team puts headphones on with loud music so they can’t hear what’s going on in the room. The rest of their team draw a phrase from the bowl and say it aloud while the team mate with the headphones on has to guess what they’re saying. The teams can either play in two-minute intervals or draw a certain number of pieces of paper each. The team or person (if playing in a single group) who has the most correct answers is the winner. If you’re having a virtual family Christmas, you can play a version of this on Zoom simply by muting the player and guessing what they’re saying.

Do your family play parlour games on Christmas Day? Let us know your traditions in the comments below!

How fun are these ideas!? Love that you shared a good blend of classic games and some new ones. Definitely going to have to try a bunch of these out this holiday season.

Yes we love playing all these games as our tradition

These are such fun ideas!