Described as The Breakfast Club meets Pretty Little Liars, the team were excited to delve into Karen M. McManus’s first YA novel, One Of Us Is Lying.

Did it keep us guessing all the way through, or did we have it all figured out from the very first chapter? Find out what the team thought of this month’s teen thriller…

Yale hopeful Bronwyn has never publicly broken a rule. Sports star Cooper only knows what he’s doing in the baseball diamond. Bad body Nate is one misstep away from a life of crime. Prom queen Addy is holding together the cracks in her perfect life. And outsider Simon, creator of the notorious gossip app at Bayview High, won’t ever talk about any of them again.

He dies 24 hours before he could post their deepest secrets online.
Investigators conclude it’s no accident. All of them are suspects. Everyone has secrets, right? 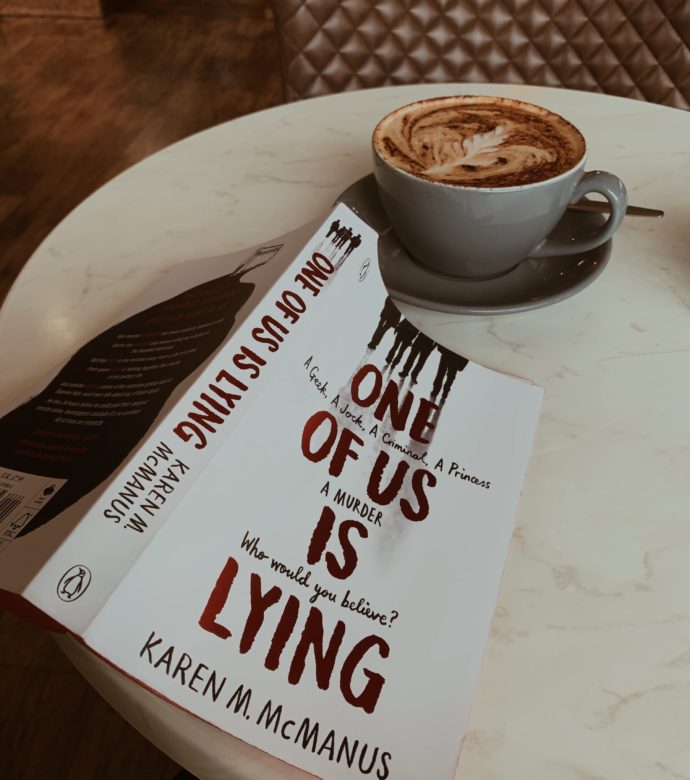 Kiley Reid’s book was a hard act to follow but I really enjoyed One Of Us Is Lying. I was engrossed in the murder mystery whodunnit narrative and the high school drama – it reminded me a whole lot of Riverdale. I mean, if Netflix do happen to get their paws on this one, I won’t be mad. You bet I’ll be there binge watching the lot! YA fiction at its best with a very messy albeit real life ending.

Rating – 4/5
Would you read it again? No (too many others on my list)
Would you recommend it? Yes 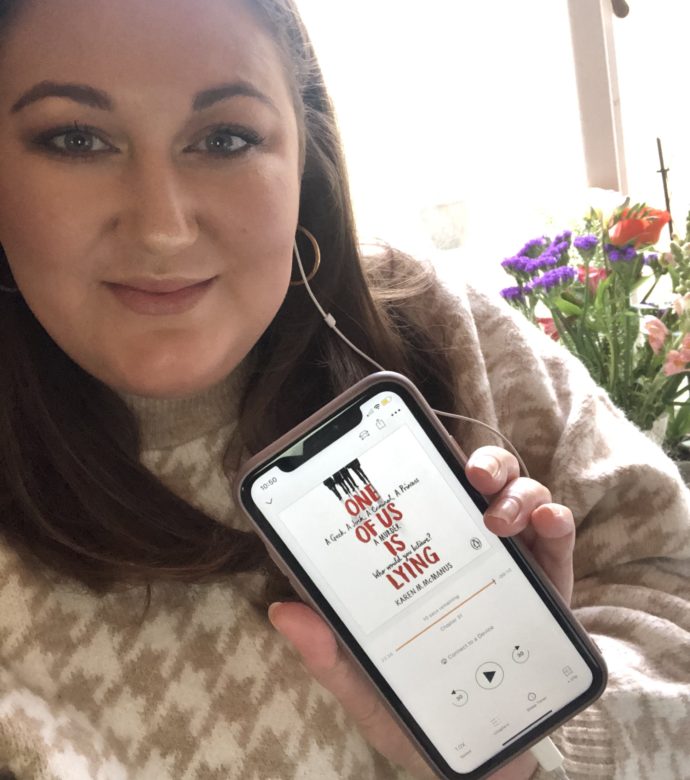 I LOVED One of is lying! it was such a good one to listen to as each character was voiced by a different person. I really connected with the main four and loved how the story unfolded, it was easy to follow and kept me guessing right up until the end. Karen created such believable characters that all have such different vibes and personalities, I can’t wait to see the TV show. I’m extremely invested in Bronwyn and Nate’s love story, possibly a little too invested. Basically just a really great read with a little bit of everything you need! 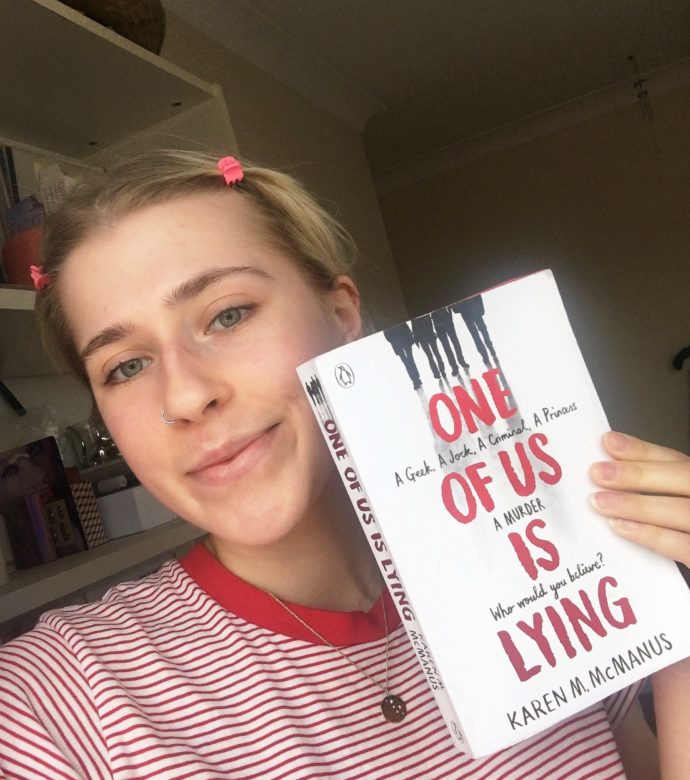 I loved this book! I found it a little hard to follow at the beginning of the story when unfamiliar with the characters and how their stories intertwined, as you’re immediately introduced to a lot of people at once which can be confusing. Considering the book is based around a murder it’s actually v tame and PG- definitely one for scaredy cats out there like me. Although I had inklings at certain aspects of the story intertwining, I didn’t predict the ending at all which I think says a lot for McManus’ writing in giving away just the right amount of information to keep you hooked without spoiling the big reveal.

Rating – 5/5
Would you read it again? No (I rarely read books twice!)
Would you recommend it? Yes 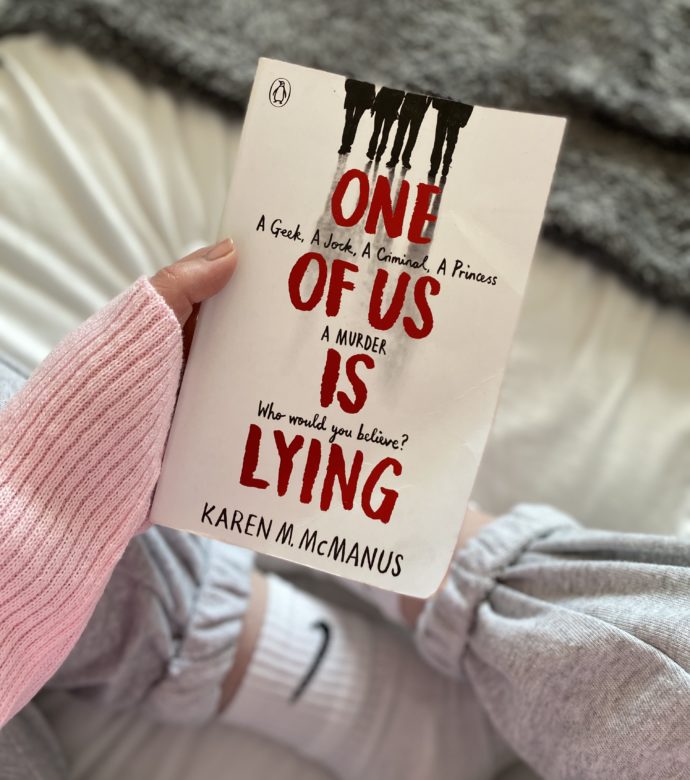 I really enjoyed this book and I was hooked from the beginning! Karen M. McManus’ style of writing was very interesting and I hadn’t read a book before which was done as diary entries, but I enjoyed seeing so many different characters perspectives of the same events. The ending really shocked me and I didn’t see it coming AT all! But once I knew, I could see where clues had been dropped within the book. Also, Brownwyn and Nates relationship gave me all the feels, I want a spin off book of their relationship! 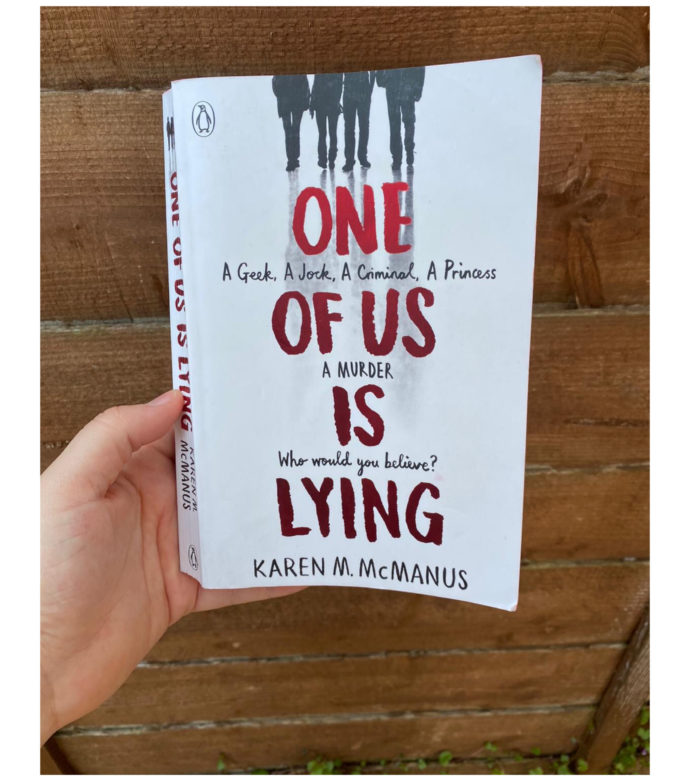 I struggled to get in to One of us is Lying at first but boyo did that change. I spent 4 hours one night finishing this bad boy off. What a twist! I literally gasped at Coopers secret, Addy’s transformation is POWERFUL, my heart ached for Nate and I want Bronwyn to be my best friend. The last 100 pages really bring it all together and teaches us about mental health and toxic relationships. Also how shitty High School can be. I guessed the ending (in part) but the way it played out was just brilliant. I also think every book should have a ‘three months later’ at the end because I went all mushy inside. Amazing! I’ve already ordered Karen McManus’ next book. 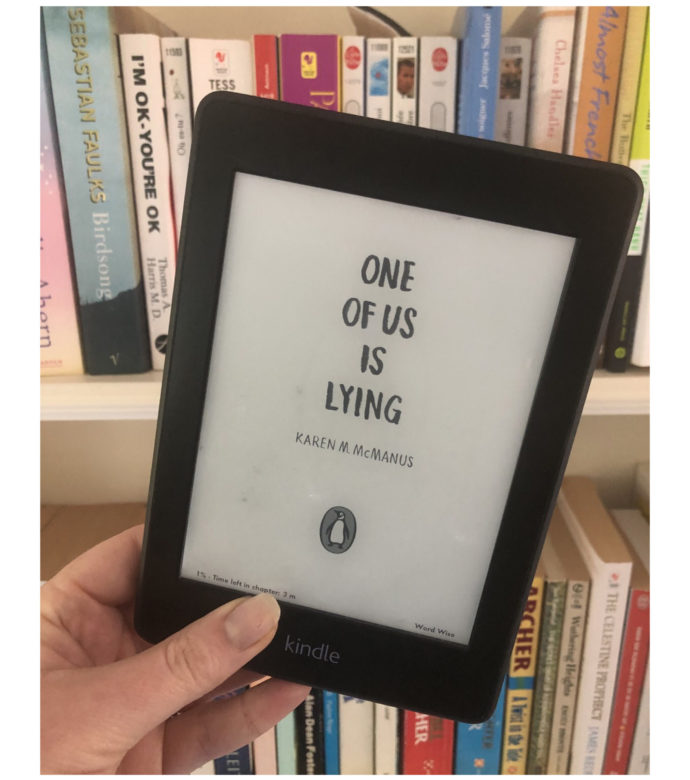 That old age saying “the truth will set you free” feels very apt for this book. I think sometimes it’s easy to be scared of who you really are, afraid that you might be judged or not liked for it and never is that felt more than in the high school environment where this story is set. Overall, I really liked this book, It’s like mean girls with a side of murder and I thoroughly enjoyed how much each character unravelled as the story went on. It keeps you guessing and second guessing right until the end and once i got half way through, i couldn’t put it down. 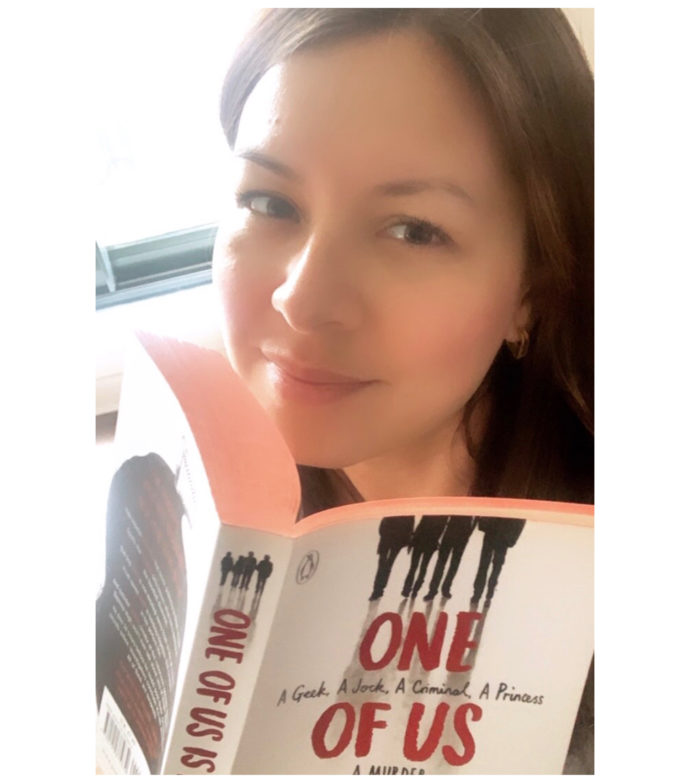 Okay, so is Karen McManus a genius? I think she might be. I read this the first time when it came out last year but I loved it more my second time through. I actually have a terrible memory for books so couldn’t remember exactly what happened the first time around. The Breakfast Club meets Pretty Little Liars – this was a great choice for me (especially to reread in these uncertain times). I was eagerly turning the pages, constantly wanting to uncover the truth. This book is the definition of addictive and has all the things I love most: mystery, suspicion, high school drama and secrets! I’m really excited to start the second book now too. Along with everything else Karen has written! 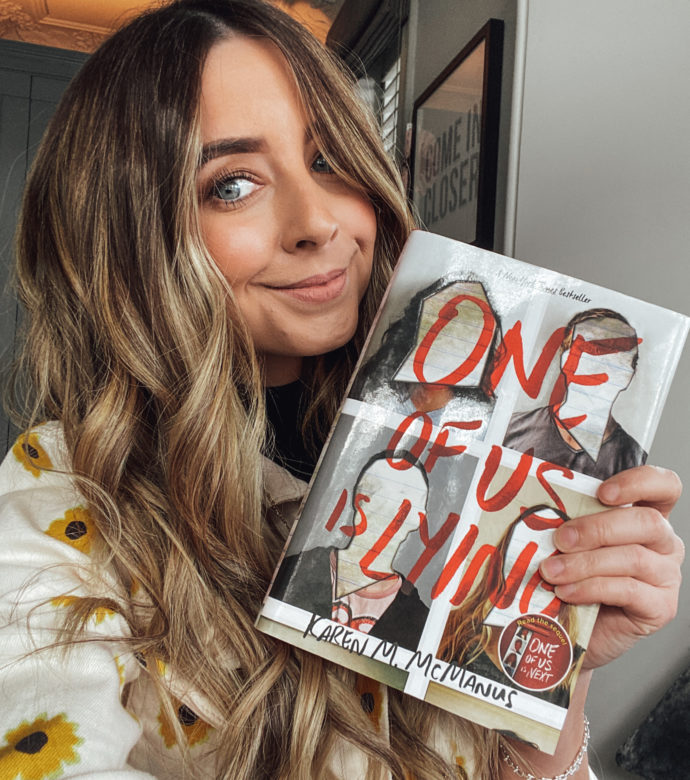 This book follows 4 students individual narratives as a death of one of their fellow students starts to unfold. It was the perfect mix of high school drama, strong character building and edge-of-your-seat-thriller. I love a book with twists and turns and Karen McManus did not disappoint. I was gripped right from the very first couple of pages and the suspense continued throughout the entire read. I thought I would struggle with four different characters points of view but actually enjoyed each of them equally and found it easy to distinguish between them. Karen’s story telling is amazing and really descriptive, I had such a vivid picture of all the students as I was reading. I completely engulfed this book and think it’s the perfect easy, gripping read! Can’t wait to read her next one!

Would you read it again? Yes

Would you recommend it? Yes

What did you think of One of us is Lying?

I loved one of us is lying.
I would recommend reading the sequel: One of us is next.

Have considered picking this up for a while but after all the great reviews I might have to pick it up now! I’m currently reading The Sun Down Motel by Simone St. James and its great if you are looking for a paranormal mystery set at an old run down motel.
https://missashleeblogs.weebly.com/

The book delivered last week and when I get through the rest of my list of books I will definitely be giving this one a go!

One of us is Lying is my favourite book club book this year. I enjoyed it so much I’ve moved straight on to One of us is Next.
It kept me guessing almost to the end and the first book this year that didn’t have a disappointing ending.

Really like the book. looking forward for the second book 🙂 didn’t expect the ending though. xx

I read both of her books and One of is lying was one of my favourites for sure. I loved it, to be honest I wanted more but then the second book came out and I loved it, even more, to be honest. It’s a good book!

Great review, I also really enjoyed this book! I posted my review on my blog, feel free to take a quick peek if you like. Have a lovely day everyone! x

One of us is lying is one of my fave books
I definitely recommend the other books this author
Two can keep a secret and
One of us is next!!

I couldn’t put it down!
Loved it and on to the next book (one of us is next)

I loved It so much

This author has three books total. They are all fantastic.

I really liked the book, but at the half of the book i already expected the end, but that’s the thing, it makes you think and create theories about the characters.

Did not expect the ending! but i’m so intrigued at Nate and Brownwyn’s relationship, but i thought it was honestly like a really good show, hope it becomes one.

I loved One of is lying. I always thought I knew who was the killer but I was always proven wrong.

I’ve been reading along and following the hashtag on instagram… but how do I join the Goodreads book club group? I haven’t been able to find it 🙁

I really enjoyed it! At first I was reading it on and off but when things started to get mysterious I couldn’t put it down!

I am about to start the sequel. I enjoyed reading one of us is lying