The novel takes place in the republic of Gilead, 15 years after the ambiguous events of The Handmaid’s Tale. Here, Atwood unpacks even more disturbing secrets of the dystopian underworld through three narrative accounts from Aunt Lydia, a Gilead girl named Agnes and a Canadian girl named Daisy.

Find out whether The Testaments got a ‘Praise Be!’ from us, or whether it left us hoping for a quick and painless Mayday rescue… 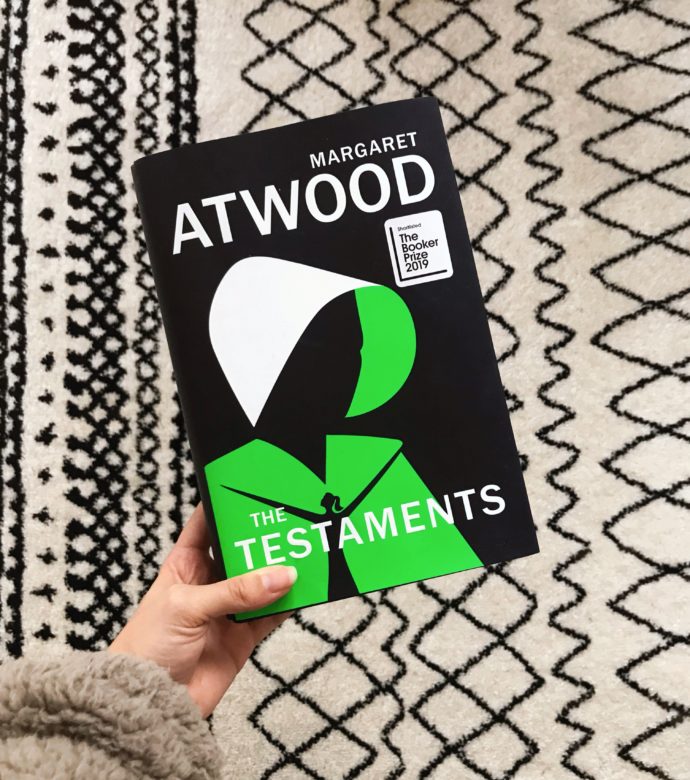 “I first read The Handmaids Tale back in school and it was one of those books that’s stuck with me ever since. It’s such a shocking yet scarily real story that you could imagine happening today, and the sequel is no different. The Testaments follows on 34 years after the first and proves the themes are just as relevant today making it a truly chilling read. I loved reading from the perspective of the three different characters and although it felt more like reading a history book than a novel at times, was gripped throughout.” 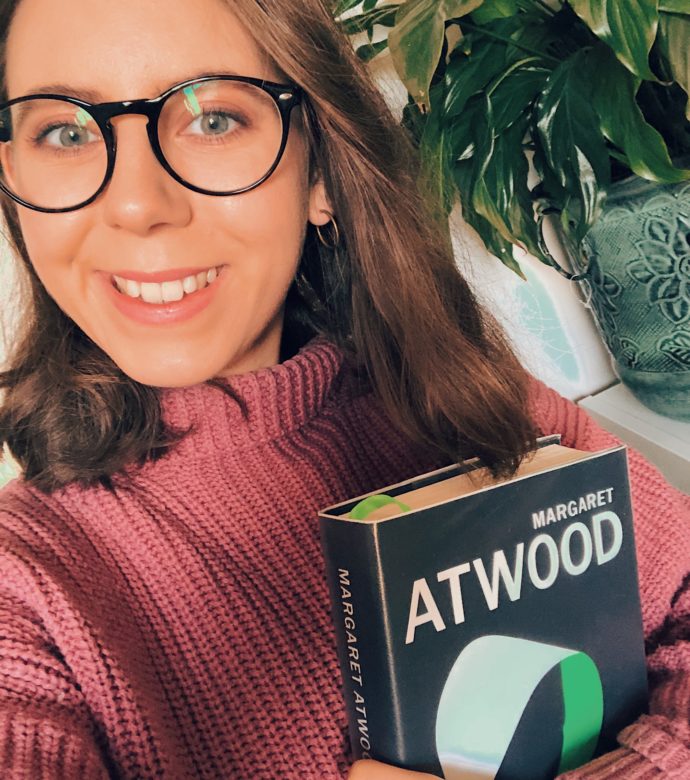 “I’ve not watched or read THT but the premise was enough to make me welp at the parallels of life today, so a sequel with promise of maybe some resolve….that too much to ask? Some hope maybe? Jumping in, I found the switching narrative took some time to get used to, which made it feel like a longer read than it was, but engrossing nonetheless.

Having no real detailed understanding of the backstory, I think some developments were less shocking or surprising to me, so would recommend brushing up before you pick up this!” 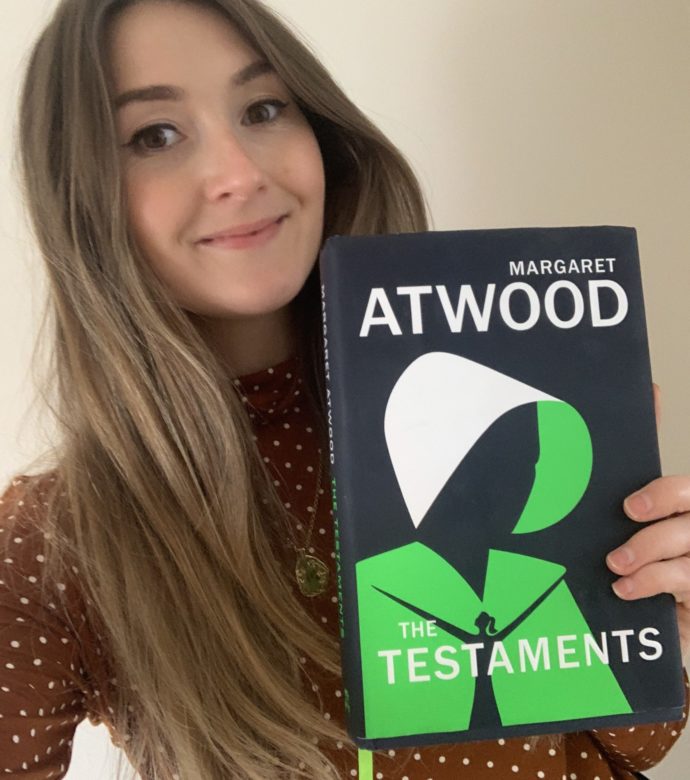 “Confession: I haven’t read The Handmaid’s Tale. But I did watch the series, so whilst I don’t have the same in-depth experience of Atwood’s highly praised novel, I had enough context to go on and I was excited to read the sequel before it no doubt becomes another binge-worthy watch.

It was always going to be a daunting task to follow Handmaid’s Tale given its success but for those with high expectations, The Testaments will not disappoint.

Whilst the multiple narrative is a little confusing at first, you soon get used to each character’s voice. I loved getting three different perspectives of Gilead, particularly the inner workings of Aunt Lydia – the fearsome woman in charge of the handmaids – and her real, unfiltered thoughts on her complex past and the toxic dystopia she both dutifully obeys and lives to resent.

Set more than 15 years after the events of The Handmaid’s Tale, Atwood answers some of the mysteries surrounding Gilead that have kept readers hanging on for decades and depending on how you like your fiction, you might have preferred a cliff-hanger or two…

An engrossing read and a worthy sequel – praise be!” 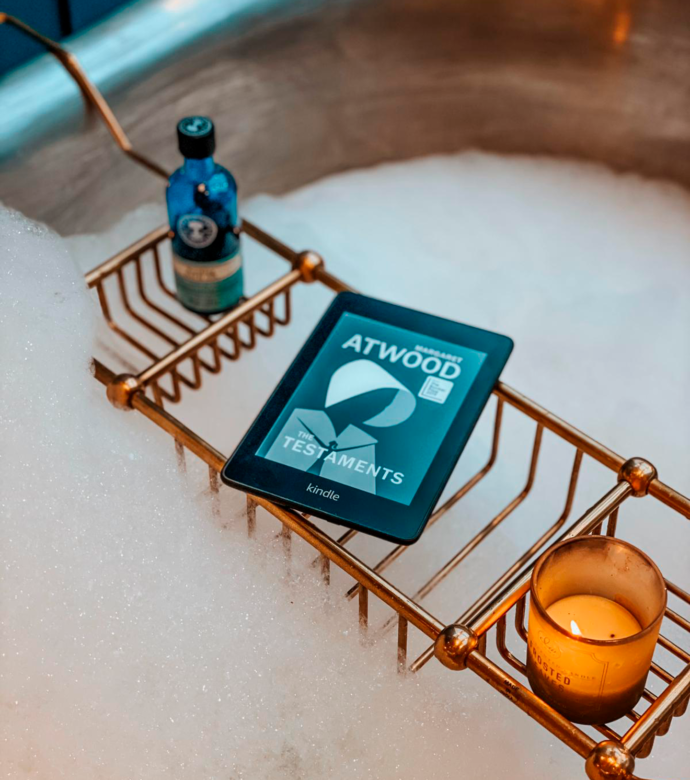 “I became a huge Handmaids Tale fan after being sucked into the tv series around 4 months ago and binge watched the entire thing over about 2 weeks. I found the whole concept both harrowing and so very interesting (and edge-of-your-seat-gripping!) Having not read the original book, I still had a good understanding of it through watching the series (although I can hear you all shouting “YOU SHOULD STILL READ THE FIRST BOOK”, which I will one day) therefore reading “The Testaments” still made complete sense to me and I was able to follow this no problem. I thoroughly enjoyed this read! I loved having three different perspectives of the same thing, all organically tying up along the way. The way in which Margaret is able to express three very different characters made you almost forget she was writing them all. Although somewhat predictable, and you can definitely sense where the storyline is heading by about midway through, I also really enjoyed the ending. It was one of those books I could have easily read in one sitting if i’d had the time, you just want to keep turning the page to find out more!”

Would I recommend to a friend – yes! (if they’ve watched the series or read the first book)
Would I read again – Yes
Rating – 4.5/5 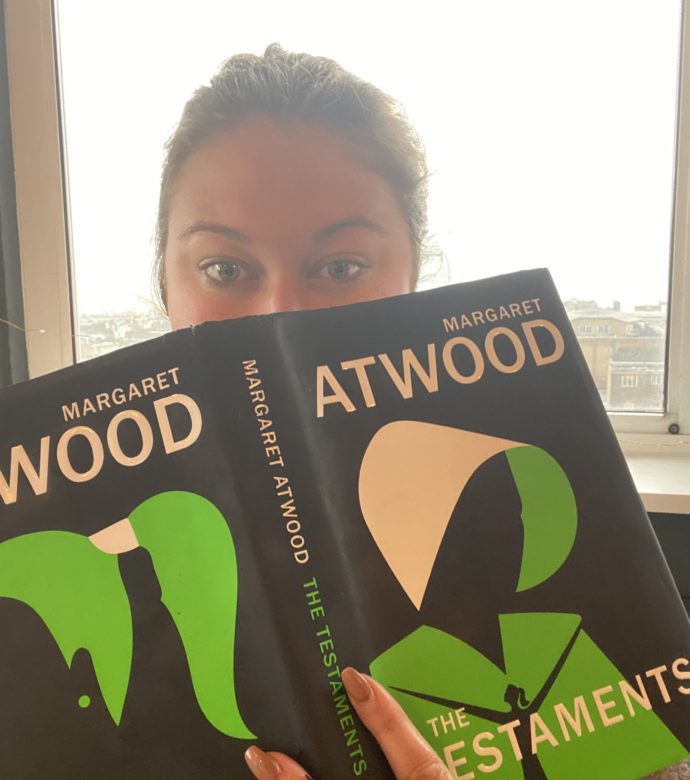 “Blessed be the fruit and may the force be with you! I quickly became obsessed with The Handmaid’s Tale on TV so I was super excited to sink my teeth into The Testaments. Although I have not read it’s predecessor I completely understand why it is regarded so highly and why it has won so many awards after reading The Testaments. Margaret Atwood is quite simply one of the most brilliant writers of our time, the way she distinguishes each of the three character’s stories in the book is magnificent, and the way she has created a dystopia which has so many parallels to our own world is heartbreaking. Books like this are more important than ever, go and read it now!”

4.5/5
Would recommend to everyone!
Will probably be re-reading, I’m sure I’ve missed lots!

Our next read is NINE PERFECT STRANGERS by Liane Moriarty – ‘From the number one best-selling author of Big Little Lies, Nine Perfect Strangers is the latest eagerly anticipated page turner from Liane Moriarty.

Nine stressed city dwellers, each hiding an imperfect life, set about getting some R & R at a wellness retreat cut off from the outside world. Watching over them is the resort’s director, a woman who will stop at nothing to transform these tired bodies and minds…

Described as hilarious, disturbing and poignant, could this be the best of Moriarty so far? We’re looking forward to finding out!’

What did you think of The Testaments? Let us know below!

Okay I need to go and that book now! I haven’t read the first one, but I did see the serie and LOVED it 🙂

One of the best books I’ve read!
I have read the first book and watched the show (massive fan over here) but I dont necessarily think you need to have read the first book. The tv show is enough (although as Zoe said, people shout at you when you haven’t read the first book hahaha.)
Loved it so much though. Especially aunt Lydia. She is one of my all time favourite book/tv characters. I now want to listen to the audio book as aunt lydia (Ann Dowd) reads parts of it!

Absolutely love it. She ties the story perfectly and in such a clever way!

I absolutely loved this book. Couldn’t put it down although I sometimes managed to guess what was going to happen. Gripping till the end and written perfectly. Would recommend to anyone who loves the first novel and the tv series!

I’m so glad you guys had this as your book club read! I too read The Handmaids Tale during school and loved it. I’m a bit indifferent to this sequel though unfortunately.

I’m actually writing a review on my blog at the moment, but I just wanted to say thank you for having this book in your book club and making me read it. It was so good and inspiring, probably as much as frightening and enlightening. I can’t wait to start to read Nine perfect stranger and hope it will be as good as last month’s pick !